There’s a distinctive new look for pupils at Upton Junior School in Broadstairs this year.

Children are now wearing shirts, ties and blazers instead of polo shirts and jumpers.

The dress code is compulsory for Year 3 pupils who joined at the start of the school year and optional for pupils in Years 4,5 and 6.

Head of School Darci Arthur introduced the new-look uniform as part of her Look Smart, Be Smart initiative.

She said: “It is all about changing our children’s self-perceptions and about encouraging self-respect. There is no doubt that it has had an effect – their mannerisms have changed and they are more business-like and grown up about their learning.

“That doesn’t mean that the fun element of learning at Upton has changed – it is just as important as ever, but I believe that a more unified look is making a difference.”

Around 75 per cent of those older pupils who were not required to change their schoolwear have done so out of choice.

Miss Arthur said: “They like the new Upton look and have really bought into it which is very encouraging. The School Wear Shop in Margate, which supplies the uniforms, has been inundated with requests.”

Each school tie bears the Upton ship crest and features three stripes in the pupil’s house colour of red, green, blue or yellow. V-neck sweaters are embroidered with the ship crest and the school name in the appropriate house colour. 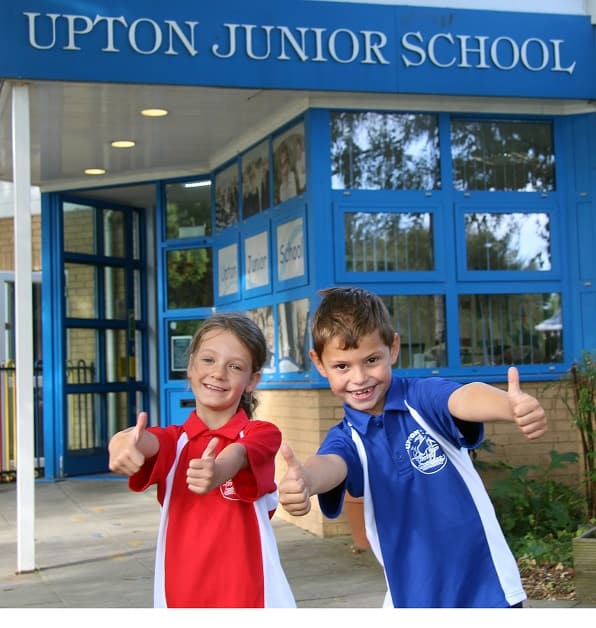 There is also a new look on the sports field and in PE lessons, with pupils wearing shirts in their house colours with a white flash.

Miss Arthur added: “Our pupils are proud to be members of their school houses and these groups are now more readily identifiable to the children through the colour coding on the uniform.”