After a terrific start to the season, Broadstairs had lost their last two games in a row going into Saturday’s match, but were able to get back to winning ways with a tense win against Nonington in a great game of cricket at Park Avenue.

On another good pitch and a fast outfield Broadstairs won the toss and batted, making a solid start reaching 39-0 after 9 overs, before two quick wickets from Paul Betts reduced them to 47-2. Scott Narraway (70) and overseas Swaroop Dasari (56) set about rebuilding the innings, before the latter was out caught behind off the bowling of Dan McHugh. After a brisk 27 from Jack Wheeler, Jamie Dewell came to the crease and he and Narraway set about propelling the home side to a defendable score, which would have to be in excess of 250 owing to the pace of the outfield. 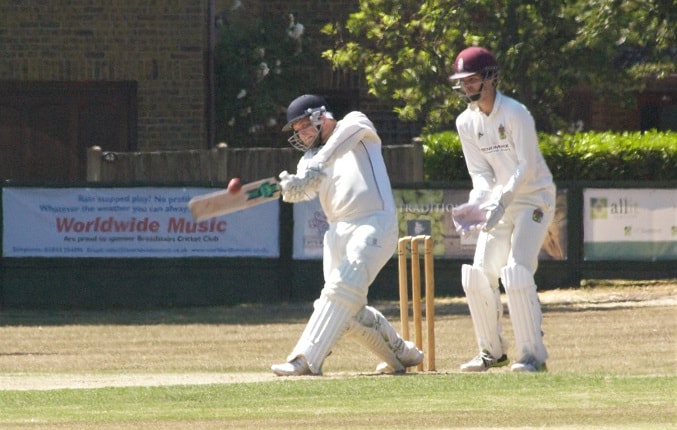 They did just this, with Dewell smashing an unbeaten 88 off just 67 balls, helping Broadstairs to a score of 268-5. The visitors got off to a slow start in the reply after some tight bowling from the opening attack of Luke Palmer and Elliot Fox, with the latter claiming the wickets of both the openers within the first 8 overs to leave Nonington 20 for 2. As the ball got older however, the partnership between Jamie Burrett and Daniel Birch started to blossom, and they were able to move the score on to 113-2 at the halfway point, looking set to build on their solid platform and challenge the host’s total. 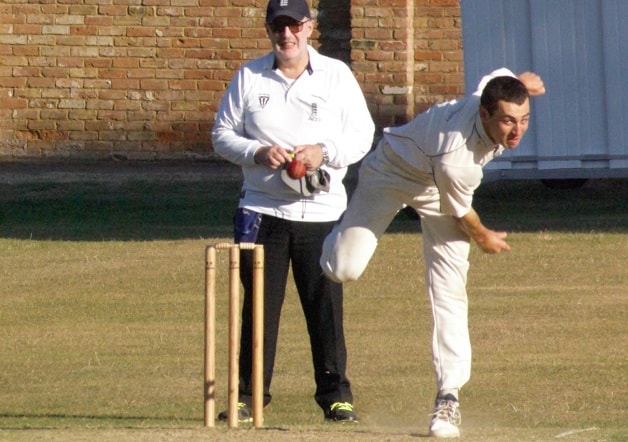 The score had moved on to 204 after 33 before on the stroke of drinks the returning Fox had Birch caught behind for 49, causing the scoring to slow. Captain Chris Kidd bowled very economically finishing with figures of 0-28 off his 10 putting the pressure back on Nonington, but despite this Burrett was still able to bring up his century in the 40th over. Crucially however, Dewell then had him caught in the deep for 103, with his side still needing 42 off the last 4 overs with 5 wickets in hand. 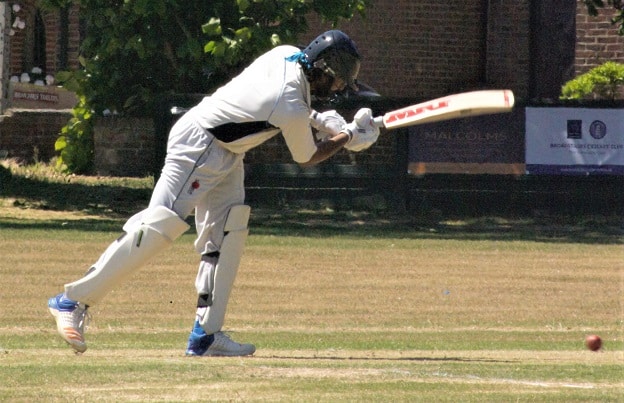 Some more tight bowling from Dewell and Dasari meant that Palmer had 20 runs to play with in the last over and he made no mistake, securing the win for Broadstairs by 13 runs. This meant the Seasiders maintain their position of second in the table, 18 points clear of Hayes who they travel to this week. 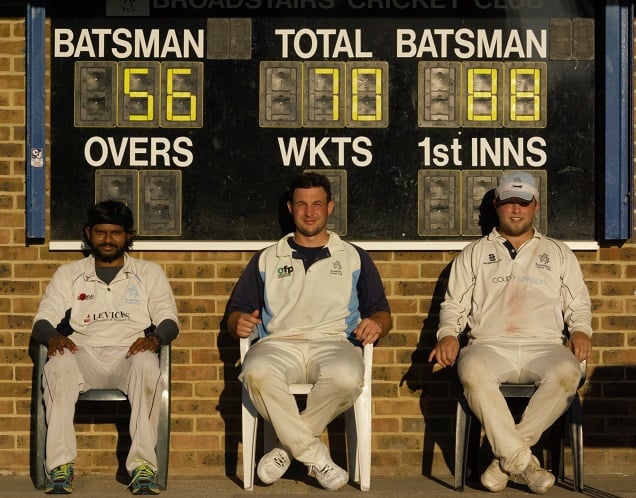 Stand in skipper James Bond won the toss and chose to bat first. The wicket usually becomes dry and dusty in the second innings thus suiting our array of spinners.

We were in trouble early on, 24-4 after 10 overs, Archie (2) was first to fall caught behind, Nathan (4) was then bowled, George (4) was caught and Tom (0) was caught at slip. James and Harry tried to consolidate for a while, Aimey bowled a fantastic spell and looked like taking a wicket every delivery. Harry (16) fell with the score on 42, caught and bowled and Oli (26) joined James (37).

The two older heads were able to weather the storm, Aimey finished his spell 3-14 from his 10 overs but they now faced the off spinner who was generating tremendous spin and some bounce. A stand of 55 in 22 overs shows just how difficult the scoring was. James’ battling innings came to an end when he was clean bowled. Farjad (11) looked to score freely until he too was bowled with the score on 123. Brad (3*) joined Oli, the first target being 150 to set some sort of total, Oli then got a leading edge and the swashbuckling Callum (14) came to the wicket.

His first two scoring shots were a thunderous lofted drive back over the bowlers head to the boundary and a nice pick up over to cow corner but after another nicely struck boundary he was suckered with a slower delivery and was early on the shot. Ashley (2) joined Bradley and the brothers set out to hit 150, but were unable to do so, Ash feeding one back to the bowler who took a good catch and Broadstairs were 145 all out with 5 overs remaining.

The Bickley reply got off to a good start, Brad then made the breakthrough in the 9th over with a rare LBW. Oli was into the attack early and struck in his third over, Natty taking the catch at cover. In his next over he removed the dangerous Bickley captain, tempting him into a sweep and a top edge taken by Brad. All of a sudden Bickley were 49-3 and Broadstairs had some belief. However, Bickley were able to consolidate and knew they had plenty of time. We maybe missed a couple of chances in the field and need to be more focused, it’s the most vital part of the game!

Harry replaced Brad and struck with what’s becoming his trademark delivery. A quick, full, off stump yorker was too good for the batsman, he also produced a fantastic slower ball that looked like it came out the back of the hand and completely bamboozled the stubborn Patel and he had his second. But with the score on 106 was there enough time?

George also bowled well, enjoying the spin friendly track he was able to beat the bat on numerous occasions and picked up his wicket courtesy of a Tom Marshall stumping. 119-6 and could have been more, a couple of missed chances that on another day may have been taken but it wasn’t to be today.

Ultimately the demolition job that Bickley did on our top order changed the game and our lack of not batting the 50 overs. We bowled really well and were better in the field but we still need to work on it.

Man of the match was Oli Frewin, batting with James he helped get us back into the game along with his good spell of bowling which included removing their best bat as well as picking up his 150th second XI wicket.

With St Lawrence also losing we’ve missed a chance to get to the top of the league. We play St Lawrence this week in a must win game if we want to get promoted.

On Sunday 22 July, our U15s, recently crowned Kent Champions, play the second round match of the National Stage of the knockout competition against Sussex champions St James Montefiore CC. The winners will progress to the London/SE regional finals at Horsham on 30 July.