Festivals are very popular, often selling out in minutes, but many aren’t suitable for people with a learning disability. To make people feel more included, East Kent Mencap has organised a one-day festival for all ages and abilities at Margate Football Club. Why not join them on Thursday, August 9, between10am – 4pm and celebrate learning disability?

There will be fun for all the family, including live music from local bands, food outlets and plenty of hands on activities to enjoy. Professionals will help you try your hand at circus skills, golf, cricket, and of course, have a kick about on the pitch! Gentler options on the day will include bingo, massage and crafts.

Tickets are now on sale at £3 each or £10 for a group of four. Under 12s go free for the day. To book, please contact funds@eastkentmencap.co.uk or phone 01843-224482. Payment can be made by card on the phone, or by cheque, payable to East Kent Mencap.

A total of 80 players took to the fairways for a shotgun start, following coffee and bacon rolls in the clubhouse, and played 18 holes in the sunshine on North Foreland’s beautiful course. The headline sponsor was Rotary Club of Thanet.

On course, players were treated to whiskey and champagne, served by event sponsor Artemis Recruitment on the 10th Tee, while a Mini convertible, donated by Barretts Group of Canterbury , advertising auction prize ‘Win a Mini for the weekend’ was on display on the 18th Tee. 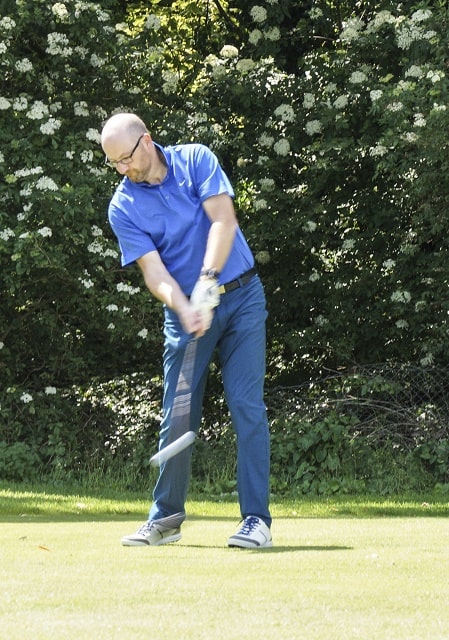 Taking first place was Trevor Brown’s team with a score of 90 points with the Team captained by Jane Pace coming not far behind in 2nd with 88 points. In 3rd place was Ann Gardner’s Team with 87 points. Lee Hack hit Nearest the Pin on the 7th hole and Jill Lamerton was Nearest the Line on the 10th. All winners received golfing prizes generously arranged by club professional Darren Parris, presented by Club Captain Stuart Barr and sponsored by Lanes Printers of Broadstairs.

In the evening, guests were treated to a 2 course meal with live music from Paul Messenger, aka Onelove , which was followed by an entertaining charity auction expertly run by club chairman Keith Rumblo and vice chairman Mike Bastow. All of the funds raised through the auction and raffle were generously matched by Barclays Bank, whose staff also attended, helping to boost the charity pot and raise extra, valuable funds for those affected by Domestic Abuse. 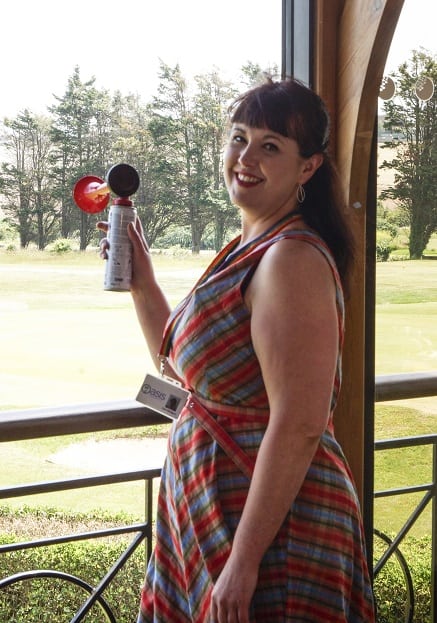 The event was well-supported by local businesses, 18 of which sponsored tees on the course.

Speaking on behalf of Headline Sponsor, The Rotary Club of Thanet, Neal Elliott said: “Over the years the Rotary Club has raised considerable funds for Oasis through their annual Boxing Gala which is held in collaboration with the Ramsgate Boxing Club. We were delighted to be the main sponsors of the Oasis Golf Day 2018, which through the tireless work of the organising committee has been a sell-out, and a guaranteed success.” 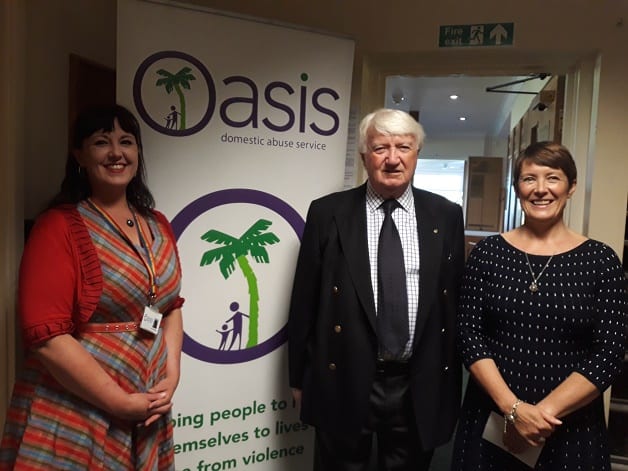 Oasis fundraising manager, Loukia Michael, said, ‘We are absolutely delighted with the success of our second golf day. We are so grateful for the fantastic support received from the local golfing and business communities as well as the excellent hospitality from North Foreland Golf Club. Domestic abuse is such a huge problem in Thanet and the funds raised by this event will help Oasis to support more families affected by this issue’. 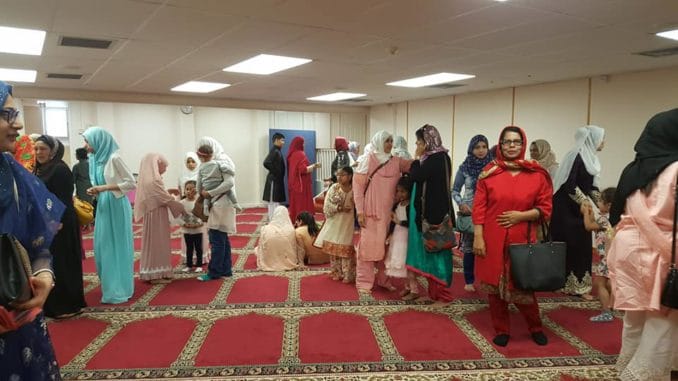 On Friday (June 15) Muslims all over the globe celebrated Eid. This marks the end of Ramadan, a period of fasting from sunrise to sunset, during which not even water can be consumed. It is traditional to break the fast by eating dates followed by a community/family meal. People are exempt from fasting if they have a health issue, are young, pregnant or elderly.
Ramadan is one of the major pillars of Islam. During the month long fast, 10% of  a Muslim’s wealth must be distributed to the poor and needy. Last year Margate Mosque donated £500 to Thanet Winter Shelter.

On Friday in Margate Mosque hundreds of people from across the world who have made Thanet their home came together to celebrate. During Eid Muslims open their doors to the community and enjoy celebrating with their close and extended family. 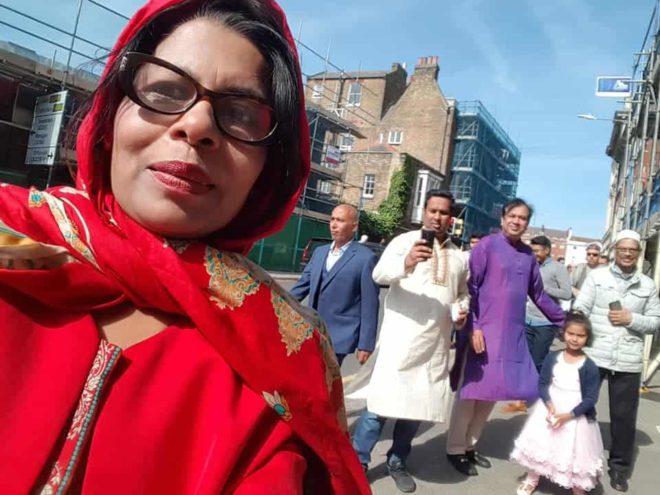 To embrace these community spirit Raushan Ara, owner of The Ramsgate Tandoori, will provide an informal celebration between 1pm and 3pmtoday (June 17). Raushan is also collaborating with Margate Mosque to have another open day as last year the event at  Margate Mosque was such a success  at bringing the community together and promoting understanding of the peaceful nature of Islam. 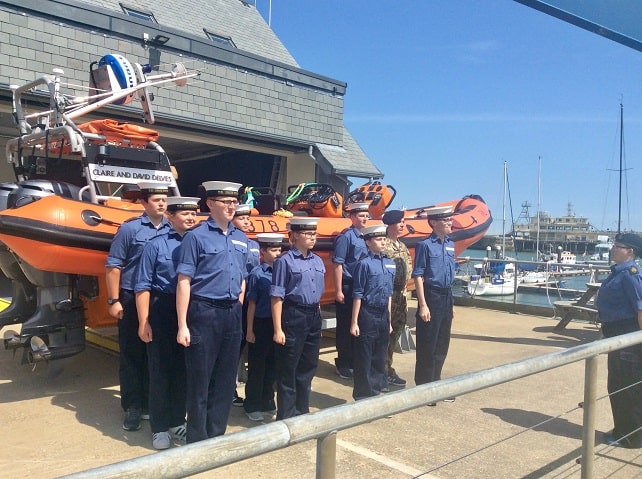 The station received a visit last week from the Sea Cadets off T.S. Jack Petchy, pictured standing smartly to attention in front of the Inshore Lifeboat.

The T.S.Jack Petchy launched in 2010 and based in Gosport, is one of 2 Sea Cadets training boats that spend their time training crews of cadets for a week at a time. The second boat is the T.S.John Jerald which is currently around the Scottish coast.

The group of Sea Cadets are from Walton -on-Naze and consist of 3 young ladies and 8 young men ranging in ages from 12 to just under 18. Their duties throughout the week are to run a watch system, learn basic engineering and also catering. The experience is made all the more realistic as they are lucky enough to have a Royal Naval Lieutenant acting as Captain onboard, as well as 2 supervisors.

They were very pleased to be given a tour of the Boathouse by Coxswain Ian Cannon. 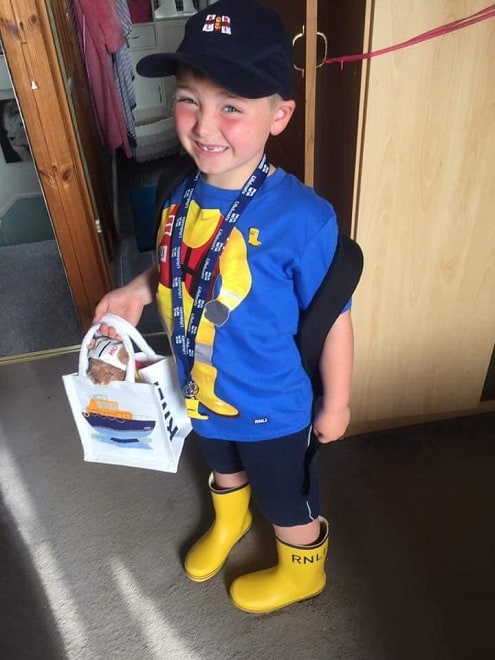 Meet Wade Emptage a young boy who chose to dress up as a RNLI person for his school’s Super Hero Day.

Wade is 6 years old and when his school, Bromstone Primary School in Broadstairs, asked the children to dress up for Super Hero’s Day he had no hesitation on deciding who he wanted to be. He wanted to go as a member of the RNLI. The school has asked that they dress as real life hero’s not comic book ones and as Wade’s mother is a great supporter of the RNLI it seemed natural that he should dress up as a crew member complete with yellow wellies. 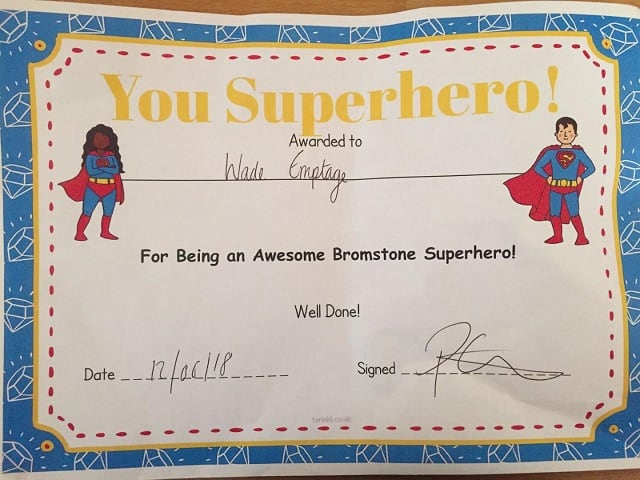 Wade’s mother has given permission to post his picture as she supports the RNLI and everything that it stands for. Without people like Wade and his mum we cannot do our job as we rely entirely on donations from the public, so we think that Wade is our Super Hero too! Thank you Wade! 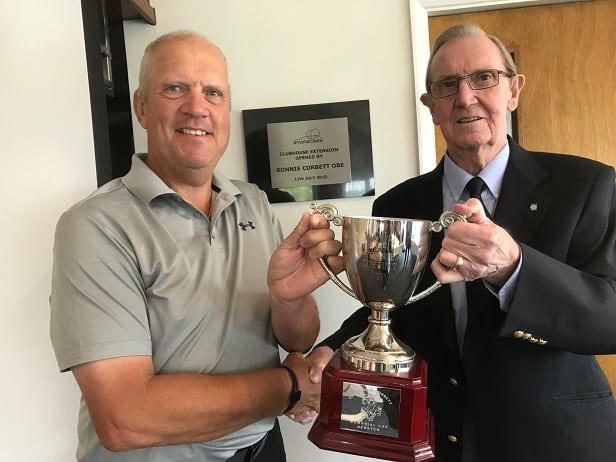 Stonelees Golf Centre Stonelees golfers paid tribute to much-loved comedian Ronnie Corbett when they played in a memorial match last Sunday.Ronnie, who died in 2016, visited the club several times, launching the original 9-hole par 3 and following its development into a 27-hole course providing some of the best coaching facilities in the county. He opened the driving range and later the new clubhouse. 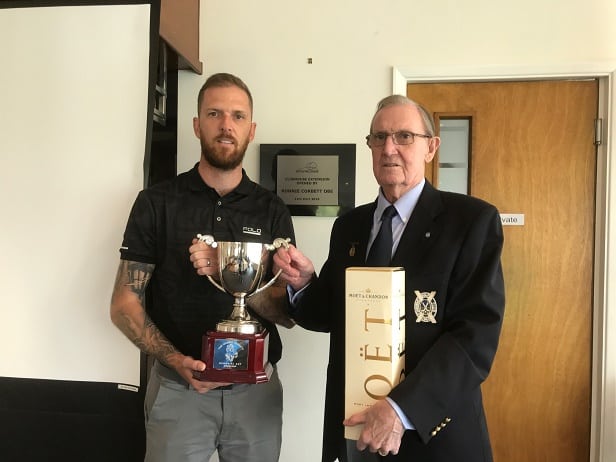 On Sunday, professional David Bonthron, friends with Ronnie for nearly 50 years, presented the trophies on behalf of Anne Corbett who donated a magnum of champagne and other prizes in her husband’s memory. 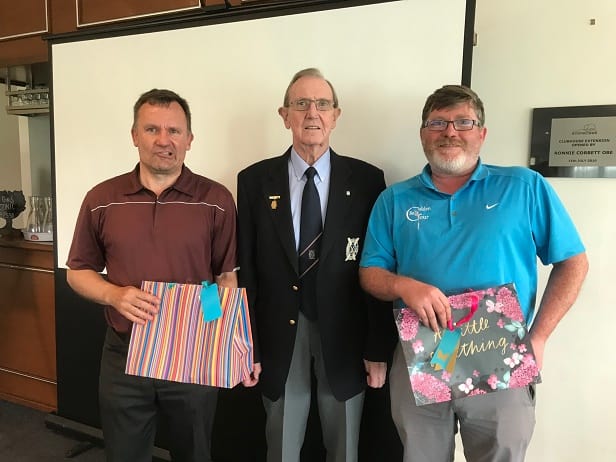 Winner of the scratch cup was Chris Hogben with a strokeplay score of 74. Phil Roddis was awarded the handicap cup for his round of 63. 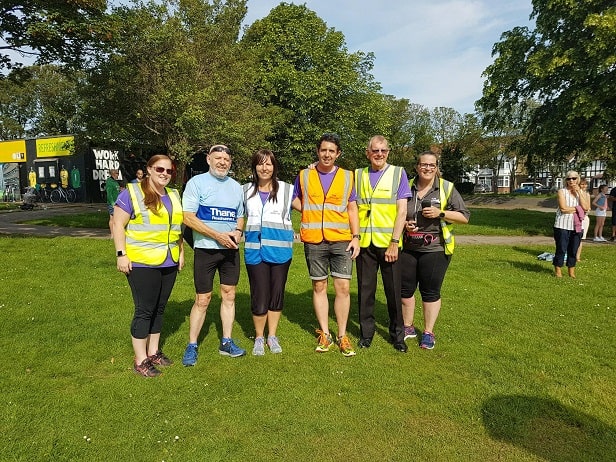 “It’s an ill wind that blows nobody any good” or so the old saying goes. This proved to be true earlier on this year, when the country was visited by the Beast from the East.  Thanet Roadrunners Athletics Club stage a number of races each year and part of the tradition is that £1.00 from each ENTRY fee is donated to a local charity, normally chosen by the race director.  This year’s Thanet 20 Mile Race was scheduled to be held on March 4 but had to be cancelled due to the inclement weather causing safety concerns. The entrants were given a choice of a refund, deferring to next year’s race or donating the entrance fee to our chosen charities.

Once all of the replies had been received and calculated, Thanet Roadrunners were able to make a £300 donation to Margate Junior parkrun to kick start their AED fund. The junior parkrun is held each Sunday morning at 9am in Hartsdown Park, close to Margate swimming pool. The junior run is a 2 kilometre run for those between 4 and 14 years old and is one of many nationwide which encourages children and their parents to take healthy exercise and socialise with others. For further information see www.parkrun.org.uk/margate-juniors

The parents of some of the parkrunners are volunteering to help at Thanet Roadrunners Kent Coastal Marathon in September as a token of appreciation for the donation. 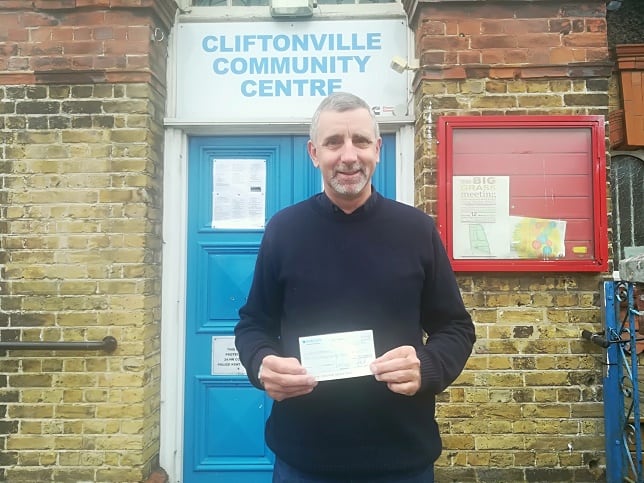 The second donation and our chosen charity for this year is “Open Christmas” an interdenominational event which sees Cliftonville Community Centre opened for Christmas Day, Boxing Day and December 27 to host lunch for people who, for whatever reason find themselves alone, homeless or dealing with other problems over the Christmas period.

This is a really worthwhile venture and Adrian Smith, Thanet Roadrunners race director for the Thanet 20,  was pleased to be able to present Nick Ratcliffe with a cheque for £500 to boost this year’s fund. More information about how you can help or donate can be found on the website openchristmasthanet.co.uk.  The website currently shows last year’s dates but this will be updated in the near future once details are finalised for this year’s event.

The club will be at the Manston Spitfire Museum operating a special amateur radio station on Saturday, June 23 from 10am to 3pm. They will be assisted by the STEMettes, girls from St Joseph’s Primary School who will be celebrating Women in Engineering Day. They will demonstrate Morse code and the Enigma machine. The public will be encouraged to take part in the activities! Can you break the Nazi’s code? Can you send an SOS or your name in Morse? 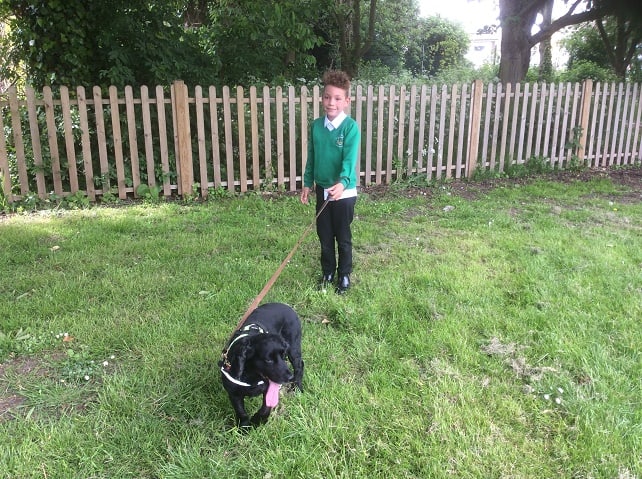 During the final week of term, year 4 were visited by Eric, a Kent Police explosives search dog, who came to celebrate his retirement from the force with the children. After 7 years working for the police, Eric will enjoy a well-earned retirement with his handler and his family.

Kent Family History Society will be at the Battles for Victory event held at Ellington Park on both July 14-15 and also at the educational day on Friday 13 July.

We will be exhibiting research into the lives of selected people, resident in Ramsgate throughout WW1.

Children, through their schools, have been invited to write a short piece about someone they know about who lived through WW1.

If you are at school in or near to Ramsgate and your school is not taking part but you would like to then you can.

Here is what to do.

Write a short A4 size piece of work about a family member, or someone you know, or may have heard of, who lived through WW1.

Here are some suggestions of things that you could include:

Bomb damage and/or being shelled.

Once you have completed your work email it to publicity@kfhs.org.uk

Your work will then be exhibited throughout the weekend in a folder, on tables or by hanging in the Red Gazebo Gallery for everyone to see. Those hung up or displayed on the Saturday will be exchanged for others on the Sunday.

Your work may also be used in any future exhibitions to encourage other young people to think about local history as well as their own family history.

We do hope you will enjoy looking back at the people who lived in Ramsgate and how WW1 effected their lives and that you come and visit us at Battles for Victory.