The Tim Peaks travelling festival stage/ coffee shop, named as a nod to the Twin Peaks series and lead actor David Lynch, is known not just for the specially blended Fair Trade coffee but also for the established and up-and-coming musicians who just ‘swing by’ for an impromptu performance.

Bizarrely Tim Peaks, which has  been set up at festivals across the UK, started life as a simple tweet.

One morning Tim just tweeted ‘coffee?’ and people across the globe began tweeting back.

Then it grew with a logo being created and an invite to go to Scotland and make a real Tim Peaks blend. 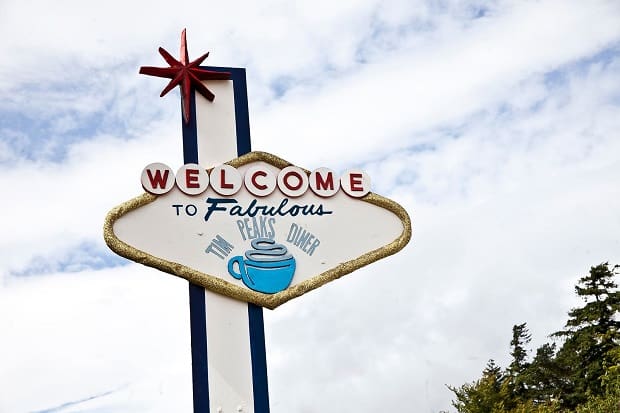 In 2012 the virtual coffee shop became reality with an invitation to set up at the Kendal Calling festival.

Tim said: “We asked Edwyn Collins to come to the first Tim Peaks at Kendal Calling, he was still recovering from a stroke, so the plan was that he would do some of his drawings and maybe do an interview.

“A week or so before he got in touch and said he could do some songs and was it OK to bring a friend to play guitar. The friend turned out to be Roddy Frame from Aztec Camera – their set was beyond brilliant and they asked me to join them for a version of A Girl Like You. It was such an emotional day and everyone’s first experience of what Tim Peaks could be.”

That first festival saw the sale of more than 2,000 cups of coffee raising the question of what to do with the cash. The decision was taken to donate it to The David Lynch Foundation – something that has been continued ever since.

Tim said: “All the money we make goes to The David Lynch Foundation. They do amazing work through teaching mediation – from young offenders to people with post traumatic stress disorder.

“ I did some work with them about 10 years ago and I’ve helped them whenever I can since then. Plus we kind of pinched the Tim Peaks name from David Lynch and we didn’t want him coming after us!”

Tim Peaks will be setting up for all three days of the Wheels & Fins festival in Joss Bay this September after getting an invite from Sunday headliners and curators The Libertines – there will even be a Libertines tea on offer!

Band frontman Pete Doherty, who has previously made an appearance at the festival café and recently has played some off the cuff gigs in Thanet, asked Tim if Tim Peaks would head down to Joss Bay for the festival.

The answer was yes and the festival organisers Dave and Dan Melmoth asked if the Tim Peaks crew if they could do all three days.

Tim said: “I’ve known Pete and Carl for a long time and they got in touch as soon as they started planning their day at Wheels & Fins. I DJ’d at Dreamland last Summer and really fell in love with Margate – they sent a photo of the beach and that was that.”

As for which musicians might make an appearance at the festival café – well, we will just have to wait and see.

Tim said: “You never know who might stop by – part of the fun is that it is a bit of a surprise. Even for me.”

And will The Charlatans’ singer be making coffee for his punters: “I stick to my strengths – DJing, singing and drinking the coffee – I can make it but we have a fantastic team who do it much better than I can. If they are short though, I can definitely step in.”