Glorious bank holiday weather has brought crowds to beaches across the isle – boosting trade but also resulting in rubbish being discarded on Thanet  bays and proms.

Despite Thanet council doubling up on weekend litter picking schedules, complaints have surfaced on social media of overflowing bins and piles of trash strewn on beaches.

Last month Thanet council announced litter teams would be making rounds twice a day at the weekends, but it appears even that has not been enough to tackle the issue even though staff were working throughout the holiday weekend.

“As you can see from the photographs the rubbish around both beach access areas is disgusting. This rubbish has been there for over 24 hours and I have seen rats foraging amongst the rubbish early this morning.

“To only provide one jumbo wheelie bin at each entrance along with two household size wheelie bins beggars belief.”

Pictures on social media also show the build up at the bay.

Bottles and cans were also thrown into the pond at Ellington Park in Ramsgate yesterday (May  6) with yobs also pouring milk into the water and a group left behind mounds of rubbish at Joss Bay.

Ellington Park trustees have stressed that the mess will be cleared and will have no impact on the upcoming May fair on May 20, which will have stalls selling a variety of goods, live music on the bandstand, a fun dog show, steam train rides, stalls and games of all kinds, funfair, beer tent and food stalls and lots more

All proceeds towards the regeneration of Ellington Park.

Walpole Bay getting busy today but only one overflowing bin down there. Can it please be emptied @ThanetCouncil and more bins put down. There were two all winter-albeit one without a lid. Thanks ????. pic.twitter.com/sZ4ElVGRK3

Beaches across the isle have been packed this weekend with thousands of visitors enjoying the sunshine. Rubbish has resulted from bins already filled to capacity but also from people leaving their trash dumped on the ground.

Thanet council steps up collections in the Summer season in a bid to keep beaches and proms clean for the essential tourist trade and residents but recent hot spells have seen the isle packed to capacity, piling on the workload for the street cleaners.

Isle residents have been digging in to do their bit this weekend with litter-picks across the isle, including by youngsters of 1st Westgate Beavers who turned out in force  yesterday to tackle litter on the beach.

Six members of Westgate Against Rubbish (WAR) also litter picked the greens, the town and surrounding areas. Twelve bags of rubbish were collected.

Volunteers from The Ramsgate Society also carried a clean up of the town yesterday.

Why a clean isle is essential -Thanet tourism in numbers

Research by Visit Kent published at the end of 2016 shows the last collected data (new data due November 2018). This covers 2015:

Are there enough bins? 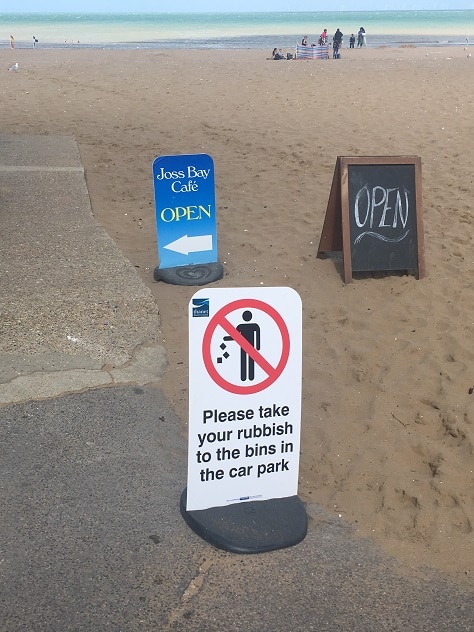 A Thanet council spokesman said there are more than 400 bins across the district – around one every 200 feet.