Multiple Sclerosis (MS) is a disease that attacks the central nervous system (the brain and spinal cord)  and affects more than 100,000 people in the UK.

It is a life-long condition which has no cure but can be treated in a variety of ways, including through medication, physiotherapy or a change in lifestyle.

Nationally those living with MS can find help and advice from the MS Trust. Locally MS sufferer Tracey Seal has created facebook page MS Coffee Group at Trinity in Thanet.

The group has been running for around a year and, as well as conversation and swapping of advice on the facebook page, has fortnightly meet ups.

Tracey, 51, from Broadstairs, says the group meets gives people a chance to get out, talk to others who understand the condition and share advice.

Here she talks about her own experience:

In 1987 I was diagnosed with Multiple Sclerosis at the tender age of 20.  I pretty much felt my inner fight or flight mode kick in straight away.  In all honesty it could easily have become fight or give up.  Thankfully, after my initial diagnosis, shock and tears, I remember my main concerns were for my new home, more than my MS.

In 1986 just the year before, I was so proud of buying my own house and a 25-year mortgage was very scary and seemed like it would last for an eternity.  But then six months after I moved in with my husband Daniel, I fell ill and was given the diagnosis of an uncertain future.

‘Do I keep the house, or sell the house?’  I remember that going over and over in my head for many weeks.  I think having that distraction kept me going, it also gave me plenty of time to try to plan ahead.

In my working life, over many years, I was responsible for things like HR, Disaster Recovery Plans and Fire Risk Assessments, to name but a few.  Little did I know how this training would help me plan where I am today.

When we could afford it and two houses later, we bought our first bungalow in North Kent.  My MS was not visible to the naked eye at this point, although inside the fatigue was slowly crushing me.  I always knew at some point that having MS would mean I’d struggle with the stairs, so a bungalow seemed to be the sensible option.

When we moved in I thought to myself, this is where we can stay forever now and we very nearly did.  Then the bubble burst.

It was a time of extreme worry with my employers and uncertainty with my walking, I remember it well.  With three years left on the mortgage, commuting by train into London every day turned into fear and dread every morning.  I had developed serious bladder complications and remember arriving into Victoria Station on platform 1 and the toilets were over the other side near platform 5.  Walking as slow as a snail, with a walking stick, it was touch and go so many times, I nearly didn’t make it.

I arrived at work nearly in tears some days.  Eventually the stress became so much, it came to the point where I had to give up work.

My MS nurse told me I could get a taxi into London every day, to help me keep my job.  But if a 30 minute train journey was not working out, how could a one hour and 15 minute car journey be any better, stuck in traffic?

This is when my husband and I, for financial reasons, decided to sell up and downshift to Broadstairs.  We knew if we could reduce our mortgage as much as possible, we stood a far better chance of keeping our own roof over our heads. 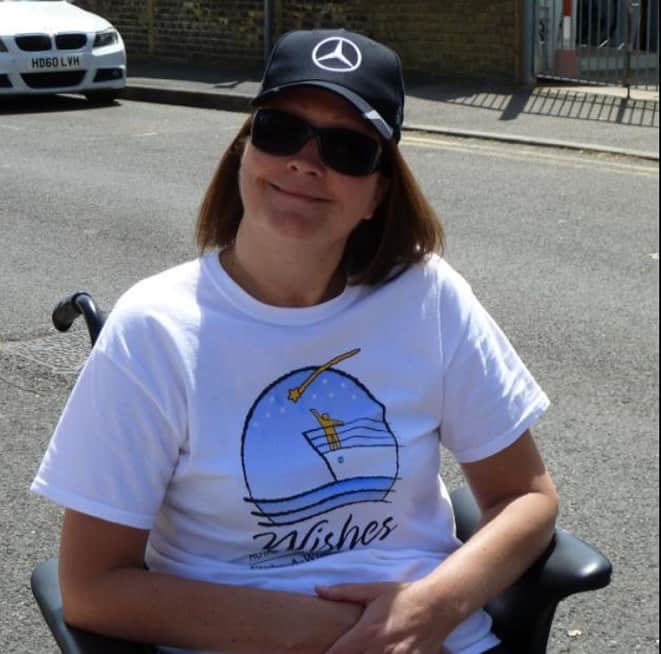 In March 2008, we bought a new chalet bungalow that we knew with a few changes, would be perfect for the future.

The cooler fresh air from the sea was just perfect for my temperature control.  I no longer needed my air conditioning unit, which was a huge bonus.  At this time I remember I was still walking around with the aid of a walking stick.

In 2009, not once did it occur to me with all my background training and experience and 22 years of living with MS, that life in a wheelchair means a Stannah stairlift is completely out of the question.  As our master bedroom was upstairs, I always thought that if the worst comes to the worst, one of these lifts would certainly bridge the gap.  Once again, I was trying to plan for an unknown future.  For two years I did manage the stairs, but then pretty much overnight my journey took another turn for the worse.

I went from slowly walking up the stairs to dragging myself up the banister, using both hands and sitting on the stairs all the way, to catch my breath.  I had an amazing MS nurse at that time called Susan Holmes.  Without her intervention life would have been so miserable.

Sue immediately organised a home visit from the wonderful Intermediate Care Team.  They came in, made an assessment and put the wheels in motion for a Disabled Facilities Grant, which would inevitably turn my life around.

In 2011, I was very fortunate to be able to reconfigure part of my downstairs area, to create a bedroom and wet room.  By the end of that year and, due to my balance going completely, I also ended up in an electric wheelchair full time.

Timing was paramount in the end and I can assure you, I came pretty close to being in a wheelchair and being unable to get upstairs to go to bed.

I urge anyone who has recently been diagnosed with MS, try to get yourself as soon as possible into a property on one level.  Then, if your condition decides to take a different turn years down the line, at least you do not have to worry about how to manage the basics.

From 2011 onwards and, after 5 years of what seemed like continuous operations, from a suprapubic catheter to an Ileostomy and having half my thyroid removed, I realised I had gone through some very difficult challenges in my life.

As strong as I am, if I am perfectly honest, it had affected my moral and later I came to realise it had also seriously affected my husband.

Who could have known that 2013 would be a very difficult year.  It felt like a tsunami had landed on our heads and everything had been destroyed.  With determination, love and the strength to carry on, we decided to leave everything that had happened in the past and try our hardest to move on. 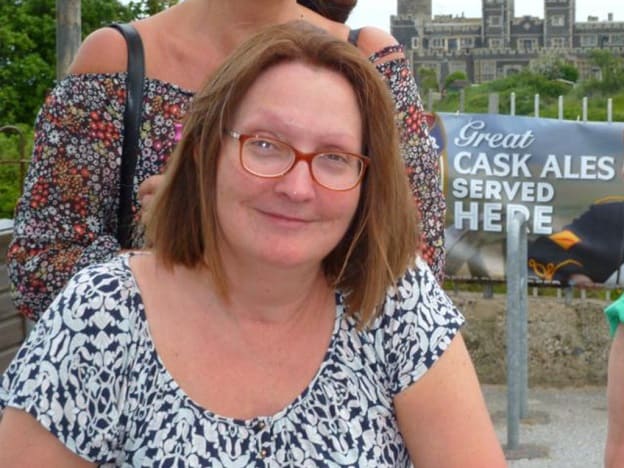 Eventually, in 2016 it felt like I had come through a very dark tunnel, out into a brighter, more adventurous time of my life.  We went to the cinema and started travelling more.  We also started attending the MS Society coffee mornings at Westwood Cross. It was whilst attending these meetings and watching other people struggle with toilets and their walking, I felt the need to set up a new Independent coffee group.  It had to be in the best setting possible, which would cater for everyone’s needs.

It also needed to be one that would appeal to the younger age group and for the first time in Thanet, encourage them to come along and meet all the other MS warriors.

With that in mind, in April 2017, I created a facebook group called The MS Coffee Group at Trinity in Thanet.  It went from 9 members to 38, in just one year.  The youngest was in their 20s, the oldest in their 70s.

We have two men with MS and we actively encourage any carers out there, to join also.  We have one lady who has a daughter with MS, but her daughter cannot bring herself to attend a support group right now, so her mother comes instead.

We meet every fortnight in The Café, from 10.30am to 12.30pm.  Some even stop longer for lunch.  Networking is paramount I have discovered, when it comes to managing this beast.  There is always someone in our group on hand with good advice and contact numbers.

Everyone really looks forward to meeting up on a Tuesday.  It is a day when we are all equal and we all understand.  There is no one there to judge you and it most definitely is the best place to get it all off your chest with laughter.

If you cannot make coffee mornings, you can always stay in touch through our Facebook page – MS Coffee Group at Trinity in Thanet.