For Wanderers Lewis Stone returned to the starting line-up at scrum half, second team captain Chris Hood was on the bench and Henry Mirams was a late replacement for the injured Peter Macaulay who took charge of the squad as Coaches Tom Carlier and Gary Hingley were unavailable.

Conditions were good and the Wanderers had the benefit of both the slope and the strong breeze as they kicked off. Thanet seemed to have contained early pressure  from the home side but after eight minutes were penalised for offside and Bromley took the lead 3-0. Two minutes later this became 10-0 as Bromley’s hooker, Archie Holland, picked up in his own half half and never relinquished his early lead ahead of the chasers to speed in up the slope for a fine opportunistic try which was easily converted. 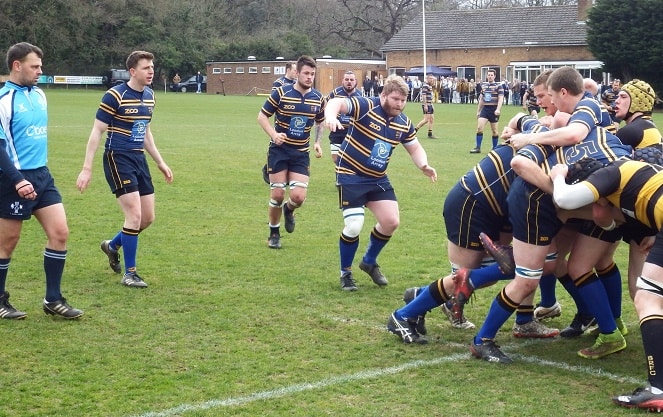 A scrum penalty to Wanderers gave Sam Rolfe an opportunity from wide left which was unsuccessful. There was now more urgency from the Wanderers and a Bromley infringement gave Rolfe an easier opportunity which sailed over 10-3. Stuart Plumridge broke strongly but repeated penalties pegged Thanet back. Jay Morbey and Charlie Knight combined well to take play deep into the home half and a Bromley infringement was again punished by Rolfe 10-6.

Andy Letts broke over the gain line and some rare fluent handling looked dangerous before Bromley again infringed and again Rolfe made them pay to put Wanderers a point behind at 10-9. Bromley launched a late offensive and increasingly desperate Thanet defence resulted in scrum half Lewis Stone being shown yellow. Wanderers defence was still reorganising as Bromley pounced taking a quick penalty and touching down for a 17-9 half time lead.

For the second half Mirams went on at scrum half with Rolfe moving to the bench, Hood made his debut in the second row replacing Kieran Wright and Jay Sanford replaced Joe Carlier in the front row. Bromley conceded a couple of penalties early in the second half and Wanderers built a good attack from the resulting field position.

Charlie Knight went very close but knocked on in a tackle. Mirams moved to the wing and Roe to full back as Wanderers were restored to full strength without conceding points. Stone made valuable metres after taking a quick penalty and Captain Brett Scott broke well but as the game moved into the final quarter Bromley stretched their lead with another penalty.

The hosts immediately turned the screw with two tries in the next five minutes as indecision and some sketchy tackling from the Wanderers helped the lively Bromley side to a 30-9 lead. Despite a late rally Wanderers failed to score a try in a league match for the first time this season and were well beaten by Bromley who bounced back strongly after recently going close in the later stages of the RFU Senior Vase.

The Wanderers side were collectively disappointed with the team’s failure to play to anything like its true potential today and will be looking for a resurgent performance against Old Dunstonians at St Peters next Saturday (kick off 3pm).

Many Wanderers from past seasons will be attending the Paul Keohane Memorial Lunch which starts at 1pm in the clubhouse and will be hoping for a  performance to equal previous thrillers that have marked this special day.