A 39 metre high Sky Tower ride will be one of the new attractions at Dreamland this Summer.

Park operator Sands Heritage has submitted a planning application to Thanet council for permission to install the ‘shoot and drop’ tower.

The new attraction will be installed between the Hurricane Jets and the food court.

Plans also reveal that some existing rides will be relocated in the park to make way for at least eight more attractions other than the Tower, including those for thrillseekers and children. An illustration of the park layout, and new attractions, has however been withdrawn from the planning site as Dreamland bosses say it does not contain the correct ride information.

A full announcement on those rides is expected after the Easter weekend.

A statement by Nexus Planning, on behalf of Sands Hertiage, says: “The new ride, called the Sky Tower, will have a maximum height of 39.5 metres above ground. The ride, constructed by Zamperla, is called the Flash Tower on the company website, and includes the following description:

“Zamperla has introduced another tower among its already wide range of towers. It’s a shoot and drop tower over 37m tall. Twelve riders are seated all around the column. This provides a great leg-dangling sensation for riders and a great spectacle for everyone else.

“The gondola design is also great for rapid loading and unloading. Individual shoulder restraints help speed this process as well. Plus, they provide a safe and comfortable experience for guests and less hassle for operator.

“The gondola is shot up to the top of the tower, suddenly decelerated before reaching the top causing a series of exciting bounces. The vehicle is then released to a free fall to the ground: the riders think they will plummet to the ground but are saved at the last second, only to be dropped again.”

A similar ride is in place at Parc du Bocasse in Normandy, France.

The ride will be custom built for Dreamland and become the tallest on the site, some 5 metres higher than the Big Wheel.

The structure will have Dreamland lettering and be lit with 240 bulbs in each DREAMLAND sign, two strips of 288 bulbs on each side of the Sky Tower, and 308 bulbs in the decorative ‘D’ at the top of the shaft.

The planning statement adds: “The Sky Tower is expected to contribute positively to the Dreamland and Margate skyline. The relationship and interface between the Sky Tower, the Scenic Railway and the Ferris Wheel, the three largest and most exciting rides at Dreamland, would help to create a focal point in the centre of Dreamland. 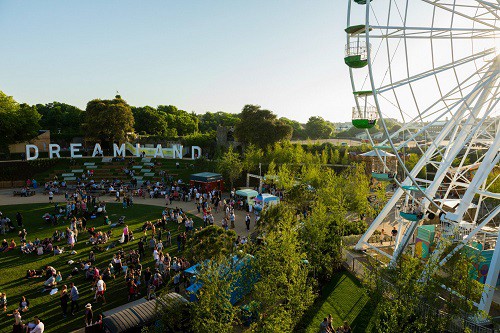 “The proposed lettering of D-R-E-A-M-L-A-N-D, to be spaced out down the side of the Sky Tower, would provide a vibrant and attractive visual appearance, and would provide a recognisable wayfinding landmark for Dreamland and Margate.”

The application, which was submitted on March 12, has not yet been decided.

A Dreamland spokesman said: “We have unveiled plans for an exciting new Dreamland Drop Tower, which will form part of a series of attractions coming to the park in 2018. The 39.5m high ride will rotate 360° giving a panoramic view of Dreamland and surrounding Margate.

“A planning application can be viewed at www.thanet.gov.uk/planning. The reference number is F/TH/18/0354. If planning permission is granted, installation work is expected to start in eight to ten weeks.”

They added: “Subject to planning permission, nine exciting new rides will be opening at Dreamland over the course of the summer with something for families and thrill seekers alike. Long-time visitors to the park will recognise new, re-imagined versions of firm favourites from the past, while others will bring a completely new experience to Dreamland. All will add to the park’s one of a kind festival feel in 2018.

” Details for the new rides, including their names and exact position on the park are currently being finalised. It is anticipated that all the new rides will be open by the beginning of the school Summer holidays.”

Park operators Sands Heritage Ltd exited administration on November 3, 2017. Last year a £25 million investment from company Arrowgrass, which has bought up the shares of the operating firm,was used for re-landscaping, vintage rides restoration and the introduction of contemporary street food, eclectic bars, a main stage.

Arrowgrass is looking at “significant” investment in the site as part of its masterplan for Dreamland and Arlington. More property acquisitions include ‘Godden’s Gap – the former amusements site – and the fish and chip shop, both on Marine Terrace.

The park reopens on Friday (March 30) with attractions including a 50 ft inflatable whale theatre installation, Peter the Rabbit and Shaun the Sheep Championsheeps.

There will also be Pop-up Entertainment around the park daily from 11am to 6pm, including: ‘Salana’, a grey seal who flaps her way through the crowds making friends; The Scuba Car, which  magically transforms into an aquarium on four wheels and Bosun Barnacle & Cap’n Short Joan Silver, two scurvy pirates in boats moving their way round the park on stilts.

Find out more at https://www.dreamland.co.uk/events