In December, 2017, The Isle of Thanet News reported the impending closure of the Church Hill dental practice in Ramsgate.

Kent Community Health NHS Foundation Trust’s dental services are commissioned to provide care at the practice, which has some 8,000 people on the books.

But the contract ends on March 31 and will not be renewed. An NHS England South East spokesperson said:  KCHT was not in a position to provide general dental services at the surgery  after that date.

Dr Rebecca Gordon-Nesbitt, a South Thanet Labour Party parliamentary hopeful, takes a look at the issue and writes on behalf of the Save Our NHS in Kent campaign:

On Saturday (March 31), Church Hill Dental Practice in Ramsgate and its satellite, Newington Road Practice, will stop providing services. In practice, as this date falls on the Easter weekend, both surgeries will close their doors tomorrow (Maundy Thursday). Valuable dental equipment is already being removed, and two of the four dentists at Church Hill have found jobs elsewhere.

As recently as  January 25, health commissioners at Kent Community Health Foundation NHS Trust made a statement reassuring people that the Newington Road Practice would not be closing. On February 16, patients were sent letters informing them that general dental services would end on March 31 and advising them to find another practice.

The statement made by KCH in January came from Dental Clinical Director for east Kent Michelle Forbes. She said: “The dental clinic in Newington Road is not closing.  It is a mixed general practice and special care dental clinic.  So, at the moment, it provides some of the dental care for patients at the Church Hill general dental practice, acting as satellite clinic.

“The satellite clinic will stop when our contract runs out for Church Hill at the end of March. However, the Newington Road clinic will continue as a dental access centre where patients can have a course of NHS dental treatment and day time urgent care. It will also continue to be a special care dental clinic.’’

Both Church Hill and Newington Road practices have provided not only excellent dental services but also a welcoming and friendly environment. A petition to resist the Church Hill closure on change.org has attracted 1,400 signatures.

One of the overwhelming reasons given by people signing the petition is the kindness of dentists at the practice; this has helped to overcome the fear that many children and adults experience when having to see a dentist. Widespread concern is also expressed that no alternative is being provided.

Staff at Church Hill were told that they would be given a list of surgeries accepting new patients, but no list has been provided. Instead, patients are being given a helpline number to call to find a new surgery (0300 123 4412). The helpline is currently experiencing waiting times of 14 minutes. Once through, patients are told that the closest surgery accepting patients is in Northdown Road, Cliftonville. In order to register, patients need to visit in person with their NHS number. This journey – and subsequent journeys for check-ups and treatment – will be inaccessible to many. 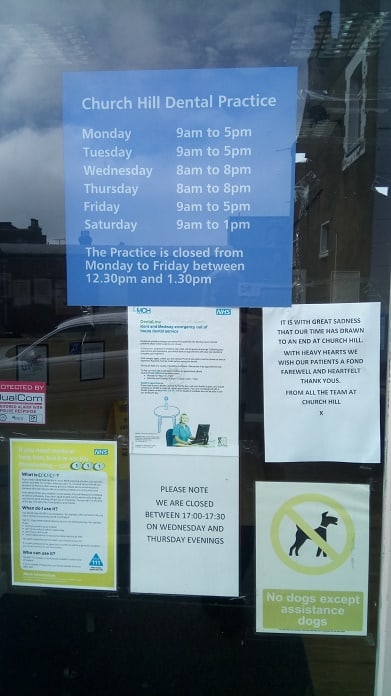 As with so much that is being done in the NHS at the moment, the decision not to renew the five-year contract for these valued surgeries appears to have been taken behind closed doors. This decision has left staff devastated and around 8,000 people in Ramsgate without a local NHS dentist.

Health commissioners are now saying that they need a year to reassess dental services in the area. Rather than being far sighted, this approach smacks of short-sightedness. Unacceptable levels of poverty in the area have a negative effect on dental health. One of the dentists at Newington Road told me about the shocking state of people’s teeth in the area, with young children’s baby teeth needing to be removed and many adults lacking their full set of teeth.

It took two years of the surgeries operating under the NHS contract to get people dentally fit. Closing these valued surgeries will reverse this good work and cost the NHS more in the longer term. I have attempted to contact NHS England for an explanation of the decision and await their answer.

The MP for South Thanet, Craig Mackinlay, mentions the impending closure of Church Hill Dental Practice on his website. He apparently visited the practice and told staff that he could have done something about it if he had known about the decision sooner.

Ultimately, we need to overturn the current legislation and reinstate responsibility for the NHS to the Secretary of State for Health. In the meantime, we need to restore excellent NHS dental services to Ramsgate.