The 13th Planet Thanet beer and Cider Festival takes place this month (March) and thousands of people are expected to attend.

Some 180 casks of beer, 60 different ciders and perries and a variety of bottled beers-including vegan and gluten free- are available over the two days of the festival on March 30-31 at Margate Winter Gardens.

Opening at midday on both days, entry is £5 on Friday and  £3 on Saturday, with free entry for card carrying CAMRA members on both days.

There will also be food available on both days along with entertainment, including ukulele band The Gaddzukes on the Saturday afternoon. 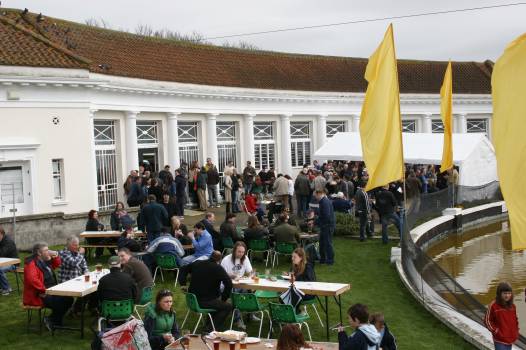 The first festival was held in 2006 at the Monkey House in Ramsgate and was instigated by Ramsgate Brewery boss Eddie Gadd  and Colin Aris, who was chairman of the Thanet branch of CAMRA at the time.

Without any guidelines to work from, Kent’s 10 breweries were invited to submit their four  finest ales, turning the festival into a  celebration and of all that’s great in the Garden of England.

The venue was filled within the first hour, and it was a case of 1 out, 1 in, for the rest of the day, with more than 1200 people through the doors – initial expectations had been for around 1000 people over the two days.

By mid-afternoon it became clear that the beer was not going to last the day, let alone the two days that had been budgeted for. Fifty-four casks of ale and ten barrels of cider, plus another 100 litres in bottles) were consumed by thirsty Thanet folk in just over eight hours. First to run out was Ramsgate brewery’s “Seasider”, closely followed by Whitstable “Raspberry Wheat Beer” and Dark Star “Critical Mass”.

The venue also featured an exhibition by the Isle of Thanet Arts Group entitled “Beer is Beautiful” and included a large number of old posters, beermats and promotional artwork from both Thompson & Wotton and Cobb’s Breweries.

Moving to the Winter Gardens the following year, some 2000 people attended over the two days and the festival has continued to grow in popularity with more than 3,500 people attending in 2017, consuming over 12,000 pints of ale and 2,750 pints of cider as well as a healthy number of bottles of beer.

Behind all of this are a willing bunch of around 90 volunteers, giving up their time beginning on the Monday before the festival to set it up and make sure the drinks are in optimum condition. They carry out various tasks over the festival and for a further two days to pack everything away afterwards. Volunteers come mainly from the Thanet branch of CAMRA, which now boasts some 500 members.

There will be the opportunity to join CAMRA whilst at the festival. Membership is currently  £25pa or £30pa for a joint membership if paying by direct debit. This entitles you to preferential rates on entry to various festivals throughout the year, a monthly newsletter and a quarterly magazine, plus discount vouchers.

The Thanet branch have regular meetings and good contacts with local breweries, and a varied social calendar. They are particularly keen to welcome some younger members.