A decision by Thanet council to refuse planning permission for 24 houses to be built on land off Briary Close in Garlinge has been overturned by the Planning Inspectorate.

In October 2016 Hume Planning Consultancy submitted an application for 17 market and 7 social rented properties for the 1.10 hectare site which lays between Garlinge and Westgate.

But in June this year TDC refused the application on the grounds that no detailed masterplan was submitted and no legal agreement was made to provide 30% affordable housing.

The planning officer also raised concerns that it would undermine the site allocation for 1,000 homes in the draft local plan. The homes are earmarked for land to the east and west of Minster Road, Westgate.

Hume Planning appealed the decision on behalf of its client Strategic Land Planning Solutions, raising the issue that Thanet council does not have an active five-year housing plan because the Local Plan – a blueprint for housing, business and infrastructure across the isle- ran out in 2011 and a new plan is still only in the draft stages.

The appeal also raised the issue that uncertainty over the future of the Manston airport site may further hamper progress of the Local Plan. 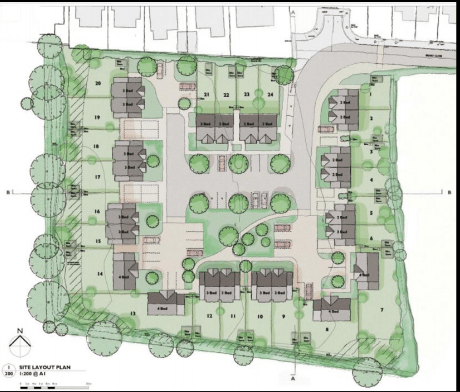 The lack of an active Local Plan with housing supply proposals leaves TDC open to landowner appeals when planning applications are refused.

Local authorities are obliged to have a five-year housing land supply as part of the National Planning Policy Framework published in March 2012 by the Department for Communities and Local Government.

The Government says the aim of the framework is to make the planning system less complex and more accessible.

If a local authority does not have a clearly stated five-year housing land supply, planning policies for new homes will be considered out of date.

This means a planning inspector can override a local decision on appeal using this one provision.

Last month Thanet council was served notice that central government may start the process of ‘taking over’ the isle’s housing and business plan.

A statement issued by Secretary of State Sajid Javid, from the Department for Communities and Local Government, said the failure of Thanet and 14 other authorities to meet deadlines to put a local plan in place means the government served notice of its intention to intervene.

In granting the appeal, giving outline permission with conditions for the development, the Inspector said: “The council has not persuaded me that this relatively small housing development would undermine the potential to secure a satisfactory masterplan for a comprehensive, mixed use development of the major part of the SHSA  (Strategic Housing Site Allocations) that would remain.

“It is necessary to assess this proposal on its individual merits and I am not persuaded that it would result in a harmful precedent leading to further fragmentation of the strategic allocation.”

The planned properties off Briary Close are described as 10 x 2 bed houses, 10 x 3 bed houses and 4 x 4 bed houses. Vehicle access to the site is proposed from Briary Close at the north-east corner of the site and is designed as a ‘continuation’ of the Briary Close carriageway.