Crime writer and Cardiff University professor Jan Bondeson is the author of a book of 56 Victorian cases of murder that were covered in the sensational weekly penny journal the Illustrated Police News between 1867 and 1900,

The Illustrated Police News was an early form of tabloid paper, using graphic sketches to illustrate its stories.

It and others like it were referred to as Penny Dreadfuls, as they cost just one penny for a weekly digest of eight, murder packed pages.

One tale Dr Bondeson has already shared with The Isle of Thanet News readers  from the book, Victorian Murders, is the ‘Ramsgate Mystery’ of 1893.

Now she brings us another tale – that of the murderous Ramsgate ganger Samuel Henson.

Victorian Murders was published by Amberley Publishing on December 15 is available here: https://www.amberley-books.com/victorian-murders.html

Samuel Henson was a 59-year-old Ramsgate man who worked as a ganger for various road and railway building companies. He had a wife and two sons, but in 1902, they left him and went to live in a small terraced house at No. 14 Flora Road. Samuel Henson, who was an angry, short-tempered man, did his best to get his family back, but they did not want anything to do with him.

Henson was quite familiar with explosives, being occupied with various blasting operations in his daily activities. At Christmas 1902, Samuel Henson went to the Ramsgate police to make a complaint against his wife and son for stealing some of his property. Police Sergeant Creedy advised him to make an appeal to the magistrate, but the truculent Henson, who did not appreciate his advice, angrily growled “I will settle the job myself! I will show them all! Blow them all to Hell!”

On February 25 1903, Samuel Henson went to confront his wife and son at No. 14 Flora Road. A lodger named Wells heard him quarrelling angrily with his wife. The 20-year-old son William Henson, who was a footballer playing for Ramsgate Town FC, stood by to rescue his mother if the demented Samuel Henson became violent. “Is this to be the finish!?” roared the furious navvy, shaking his fists at his wife. “Yes!” replied Mrs Henson and her son.

“Well, then!” exclaimed Samuel Henson, pulling a large bomb out of his bag and lighting the fuse! The agile young William Henson managed to snatch the infernal machine away, and desperately ran through the kitchen to throw it into the garden. When he was in the scullery, the powerful bomb exploded, blasting him into little pieces and reducing the rear part of the house to rubble.

Mrs Gardner, an elderly woman living next doors at No. 12 Flora Road, felt the house shaking and heard the tremendous explosion. Her own scullery had been damaged by the blast, and when she went to inspect it, she heard a cracked voice calling for help. She saw that William Henry Wells, the young man who lodged with the Hensons, had been blown straight out of his bed when the house exploded: dressed only in his nightshirt, he was desperately clinging to a downpipe. Mrs Gardner let the shaken lodger in through her bedroom window.

When a police constable and four neighbours entered No. 14 Flora Road, the wrecked house was filled by a choking, sulphuric odour. The rear of the house had been entirely blown away, and the front of the house was full of debris: furniture, pictures, bricks and woodwork thrown about by the explosion. The desperado Samuel Henson was still alive, although he had a wound in the throat. Mrs Henson was pinned against the wall, underneath an overturned sofa, with deep wounds to her head and throat.

After the two Hensons had been removed to the hospital, on stretchers, the search of No. 14 Flora Road continued. Back in the scullery, the scattered remains of William Henson were found, amidst much rubble and bricks from the explosion.

A Ramsgate correspondent to the rather disreputable crime weekly Illustrated Police Budget went to have a look at No. 14 Flora Road the next morning. Windows were broken in houses within 300 yards from the explosion, and the knockers had been blown off the front doors of many houses in Flora Road. In the ruined scullery of No. 14, full of debris from the explosion, a large framed portrait of Queen Victoria rested on a ledge, its glass perfectly unharmed.

Old Mrs Gardener at No. 12 described how she had helped rescue the lodger Wells. Mrs Newby at No. 16 said that at the time of the explosion, her children had screamed, and she had been too terrified to venture outdoors. She had several times heard Samuel Henson quarrelling with his wife, who was 14 years younger than him, and accusing her of consorting with other men when he was away working at the building sites.

No. 10 Flora Road had a henhouse in the garden, and the hens had been blown off their perches by the explosion, the wretched birds remaining on the ground all morning, like if paralyzed. There was grief among the many friends of young William Henson, who worked as a bricklayer, and also in Ramsgate Town Football Club, where he was centre-forward in the ‘A’ team. Rather ironically, William Henson left all his effects, value of £100, to his father Samuel the railway-ganger.

“The Ramsgate Horror! – Terrible Triple Tragedy! – Attempted Wife Murder and Suicide! – Heroic Son Killed by Dynamite!” exclaimed the breathless headline of the Budget, accompanied by lurid illustrations of the bomb exploding, and the two injured Hensons found in the half-destroyed house. 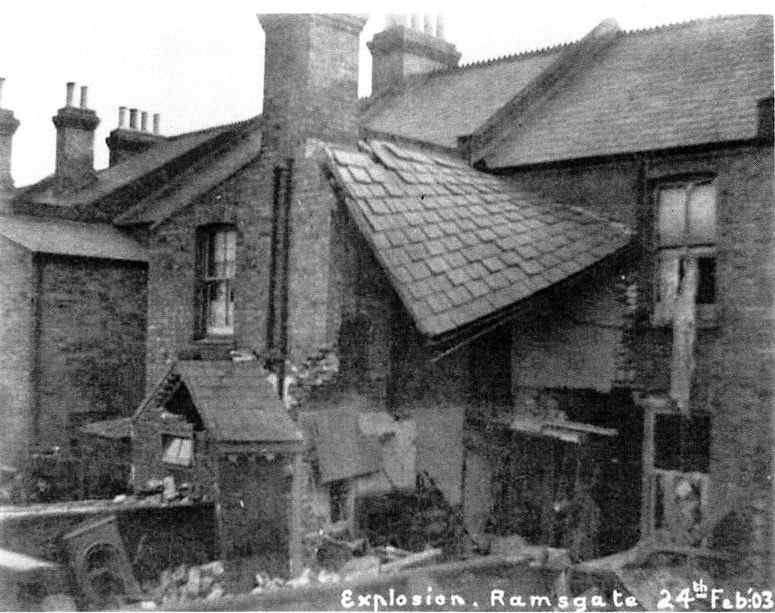 In hospital, Samuel Henson expressed regret that his son had been killed, and dismay that his wife, the intended victim of his murderous attack, had survived. The coroner’s inquest on William Henson returned a verdict of wilful murder against his father Samuel, and the Ramsgate desperado was committed to stand trial at the Kent Assizes at Maidstone on July 18.

The evidence against him appeared rock solid: he had stolen dynamite used for blasting stone at his workplace in Derby, made the bomb and brought it to No. 14 Flora Road to teach his wife a hard lesson. After young William Henson had run off with the bomb, Samuel had cut his wife’s throat, and then his own, although he had been more squeamish in his suicidal ambitions, and caused only minor injuries. The wife had also survived the attempt on her life, without permanent injury.

On trial, Samuel Henson claimed that he had bought the dynamite from a man named Harry Green in Chatham, and brought it to Ramsgate where he thought it would be needed in his work. When lighting a cigar, he had misadvertently ignited the fuse of the bomb, and after accidentally killing his son, he had been so upset that he had cut his own throat with a knife. He denied attacking or injuring his wife.

The Ramsgate desperado’s story was not believed, however, and the man Harry Green could not be tracked down to testify in court. In his summing-up, Mr Justice Darling said that this was the first time that Samuel Henson had suggested that his son’s death had been an accident, and he asked the jury if they could really accept this explanation. He reminded the jury that if a person in committing a felony killed some other person than the one he intended to dispatch, he was still guilty of murder.

After deliberating for just ten minutes, the jury returned a verdict of ‘Guilty’ and Mr Justice Darling sentenced Henson to death. Henson was quite unmoved, commenting that he quite approved of the verdict. After he had attempted to cheat the hangman through dashing his brains out against the wall of his cell, he was kept under a strict ‘suicide watch’.

The execution was planned for August 4, but Henson received a late reprieve, the sentence being commuted to imprisonment for life, following the receipt of a petition for clemency, on grounds of insanity. 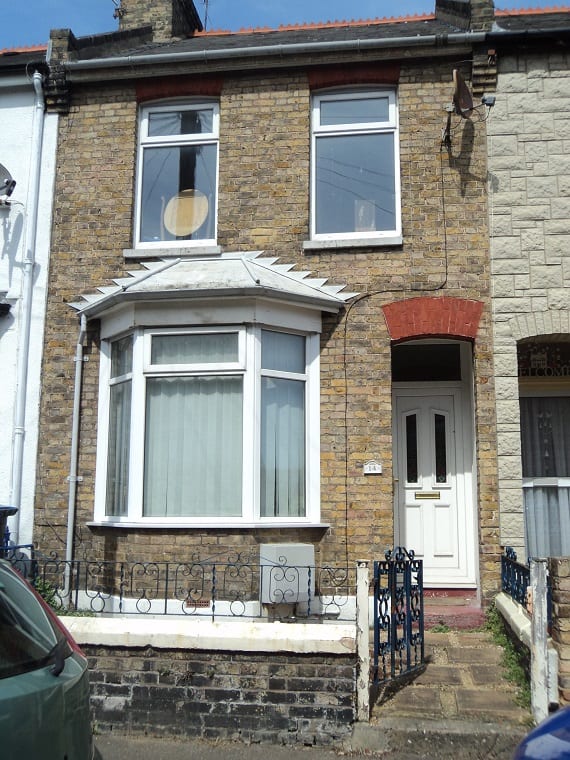 The murder house at No. 14 Flora Road was repaired after the explosion, and it still stands today.