A booklet has been produced – Digging at the Gateway – from prehistory to Caesar and beyond – charting evidences from centuries of history in Thanet unearthed during the construction of the  second phase East Kent Access road.

For thousands of years East Kent has been a gateway for new peoples, new cultures, new ideas and for trade. Kent County Council’s construction of the new road link provided a rare opportunity to undertake large-scale investigations of this important archaeological landscape.

Thanet, effectively an island from the Early Bronze Age until the 15th century AD, is now joined to the mainland following the silting up and reclamation of the Wantsum Channel.

The Oxford Wessex Archaeology (OWA) joint venture project, at times involving over 150 archaeologists, undertook a series of excavations, covering 48 hectares, along the 6.5-kilometre route of the new road. This work, the biggest archaeological excavation in the UK in 2010, revealed a wealth of evidence spanning the Palaeolithic to the Second World War. 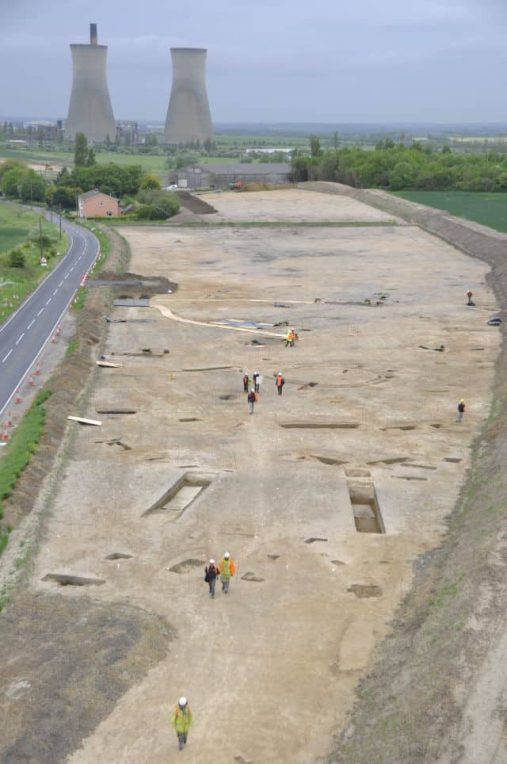 The discovery of a large, ditched enclosure of mid-1st century BC date on the Ebbsfleet peninsula was probably the most significant  of the entire EKA project, revealing a probable link to Julius Caesar.

Community outreach formed an important  part of the project. This included a wide-ranging programme of events including open days, school visits, roadshows and public talks, as well as the community excavation of one of the Early Bronze Age ring ditches.

The results of the work were published in 2015, but that did not mark the end of the EKA project. The paper and electronic records, as well as the large number of finds, have been prepared for long-term storage, and further excavations have taken place.

The discovery of what may have been a temporary camp constructed by Julius Caesar during his second visit to these shores led to a major new research project, based at Leicester University funded by The Leverhulme Trust.

Based on new evidence, the team suggests that the first landing of Julius Caesar’s fleet in Britain took place in 54BC at Pegwell Bay.

With the exception of a single ﬂ int ﬂ ake of probable Palaeolithic date and one further Late Upper Palaeolithic/Early Mesolithic piece, the earliest discoveries were a Mesolithic tranchet axe and a small number of microliths and other diagnostic pieces of similar date. 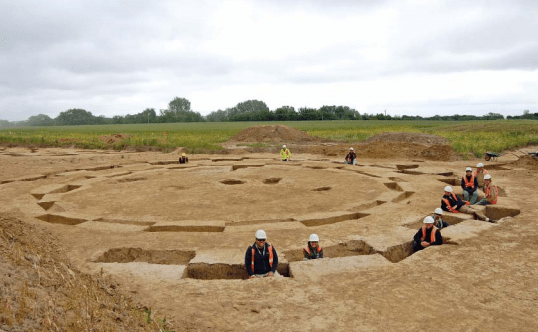 Early and Middle Bronze Age barrows on the chalk ridge

Five Early Bronze Age round barrows were found in more elevated positions on the chalk ridge overlooking the Wantsum Channel.

The disarticulated remains of another adult (probably male) were recovered from a ring ditch.

The excavations provided important evidence, previously largely absent on Thanet, for the large-scale organisation and permanent settlement of the landscape during the later Bronze Age

A small hoard of bronze objects containing 17 fragments of ingots and broken bronze objects (including at least one socketed axe and a sword) dating from the later part of the Ewart Park metalworking stage of the Bronze Age (c. 920–800 BC). In addition, there was a spread of bronze fragments in the same area possibly deriving from a further, dispersed hoard.

The most signiﬁcant Early–Middle Iron Age site was on a promontory of high ground at Cliffs End, overlooking Pegwell Bay. It included a large trapezoidal enclosure, over 80 m long and 32–50 m wide, with broad deep ditches and an entrance in its narrower eastern end. It was built partly over a Bronze Age ring ditch but there were no indications that there had been any barrow mound surviving at the time of its construction – this may have been deliberately levelled at the time.

There was a large sunken-featured building, approximately 6.5 m square, in the northwestern corner of the enclosure.

Prehistoric examples of sunken-featured buildings are rare and appear to be unique to Thanet, but nothing quite like this one had been found before on the island.

The Iron Age was the most extensively represented period on the scheme, and the vestiges of settlement, enclosures, ﬁeld systems and trackways were widespread.

A variety of ﬁ nds came from the various Iron Age settlements, but especially those in Zone 6 and Zone 13. The 2nd−1st-century BC potin coins have added considerably to previous coin ﬁnds from the area, whilst the metalwork assemblage provides a large group from this period. The latter includes agricultural and other tools, household ﬁttings and equipment, and rarer objects such as the iron armlet from one of the burials in Zone 12.

Caesar’s own account of his landing in 54 BC, with three clues about the topography of the landing site, are consistent with him having landed in Pegwell Bay: its visibility from the sea, the existence of a large open bay, and the presence of higher ground nearby.

A concentration of evidence in the middle−late Roman period, was located on the chalk ridge. The settlement, perhaps spanning much of the 3rd and 4th centuries, lay on either side of a metalled trackway.

A small cemetery, containing three inhumation and three cremation graves, lay within the plot immediately east of the settlement. All six burials, ranging from infants to adults, male and female, were accompanied by pottery vessels which date the cemetery to the middle Roman period. Further individual burials were recorded close to the corners of other plots. The part of the settlement uncovered consisted of ﬁ ve sunken-featured buildings.

All or parts of ﬁve small cemeteries, together containing 33 cremation burials and 38 inhumations, were examined.

Early to mid-Saxon settlement and cemeteries

The principal remains comprised several cemeteries together probably spanning the mid-6th–early 8th centuries, and associated early–mid-Saxon settlement remains, for which there was previously little evidence in Thanet, or indeed more widely in Kent.

A dispersed group of three sunken-featured buildings lay on the lower slopes of Cottington Hill (in Zone 11), with parts of one or more cemeteries close to a complex of trackways higher up and extending along the chalk ridge 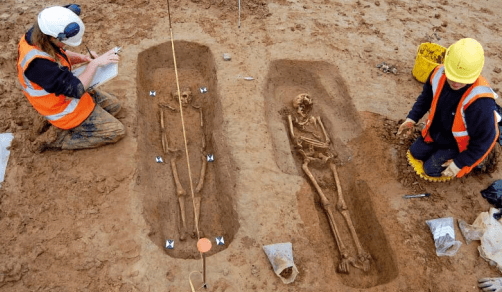 A small Mid-Saxon inhumation cemetery of late 7th–8th-century date was uncovered on high ground to the north of Cliffs End. Although no trace of a burial enclosure was found, the 24 east–west graves were arranged close together in several rows suggesting that the whole of the cemetery had been revealed. In all but one of the graves (which was empty) the burials were extended and supine, with the heads to the west. Only one grave, of an individual aged over 18, contained an identiﬁable grave good – an iron knife – although another grave contained 10 nails.

Two broadly contemporary farmsteads were established quite close together, their main phase of development spanning the 11th–14th centuries. Most of the features were ditches, forming a series of ﬁelds and enclosures.

The footings of a small building, to the north of Minster, were the remains of an isolation ward of a hospital which occupied the former Isle Of Thanet Workhouse, built in 1836 to house up to 400 inmates. The hospital was ﬁnally demolished in 1989.

The other main remains comprised a network of World War II zig-zag trenches, dug for defence around the southern perimeter of Manston Airﬁeld. This was an important front-line ﬁghter base, being located close to the Thames which provided the main route of ‘enemy’ attack on London. Slight remains of trenches were also recorded further south, associated with a probable searchlight position forming part of Thanet’s coastal defences.