A former railway crossing keeper’s cottage at Westwood, on Star Lane, has been partially demolished ahead of a scheme to replace it with 12 flats.

The old Gate House cottage, which was once occupied by the person who operated the level crossing gates from the road over the former Ramsgate town to Margate Sands railway branch Line, is sited at 43 Star Lane.

An application to flatten the property and build the flats was lodged by land owner RealRole Ltd and company director Mr Gilchrist last year and granted permission in March this year. 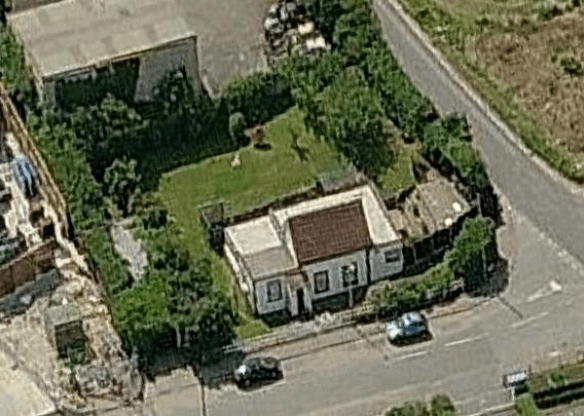 A revised application, which has not yet been decided by Thanet council, was then submitted on behalf of a Mr Blanchard in July and validated in September.

The planning consultant, JWDB Planning headed up by former council officer Doug Brown, is listed on both applications.

The main change in the new application is a increase in  height of the new building by one storey and the addition of two flats – taking it from 10 to 12.

Work to bring the historic cottage down has now almost been completed despite concerns at the loss of a piece of Thanet’s history. A small piece of the property, containing one room and a toilet area, is all that currently remains.

It is proposed that the site, at the corner with Nash Lane, will instead be used for a four-storey apartment building. The scheme will have 14 parking spaces with road access from Star Lane.

The planning consultants say: “The design philosophy is to provide a fusion between the traditional residential apartments facing the site and the adjacent retail commercial style of development.

“The site is an important corner landmark site in a prominent location at the junction of Nash Road and Star Lane. It will create a focal point at one of the main entrances to the Westwood Town Centre.

“This scheme will help link the residential and retail development adjacent to the new Star Lane Roundabout as well as providing a landmark building with a prominent corner feature that will help people navigate their way through the Westwood Development.”

The Margate Sands branch  line was closed on July 2,1926, when the new Ramsgate station opened. Ramsgate Town formerly was the termini on what is now Station Approach.

Trains from Margate Sands would run into this station and reverse to continue onwards towards Minster. The Newington Road bridge was the site of the former St Lawrence station and formed a triangular junction in the area of what is now used for the Ramsgate carriage sidings.

The line from Margate diverged directly through this area at Whitehall junction, near White Hall Farm (now Whitehall Road) and connected back up shortly before Newington Road bridge.

The site  was sold into private ownership in the 1950s.

As part of the initial application grant in March Realrole Ltd agreed to pay £408 for each unit as a developer contribution towards mitigating any impact on the Sandwich Bay Special Protection Area.

A Thanet council spokesman was unable to explain why a lodged demolition notice for the cottage had been listed as invalid, saying the responsible officer was away from work until Monday.