A commemoration has taken place to mark the restoration of the Surf Boat memorial at Margate cemetery, 120 years after the disaster claimed the lives of nine Margate boatmen.

The RNLI recently carried out a restoration of the memorial and Nicola Dowsett, cemeteries and crematorium manager for Thanet District Council, suggested a simple ceremony be held to mark the work and the tragedy itself.

On 2 December 1897 the town Surf Boat ‘Friend To All Nations’ went to the aid of the sailing vessel ‘Persian Empire’. In appalling weather conditions, the Surf Boat capsized on the Nayland Rock at Margate with the loss of nine of the 13 souls on board. 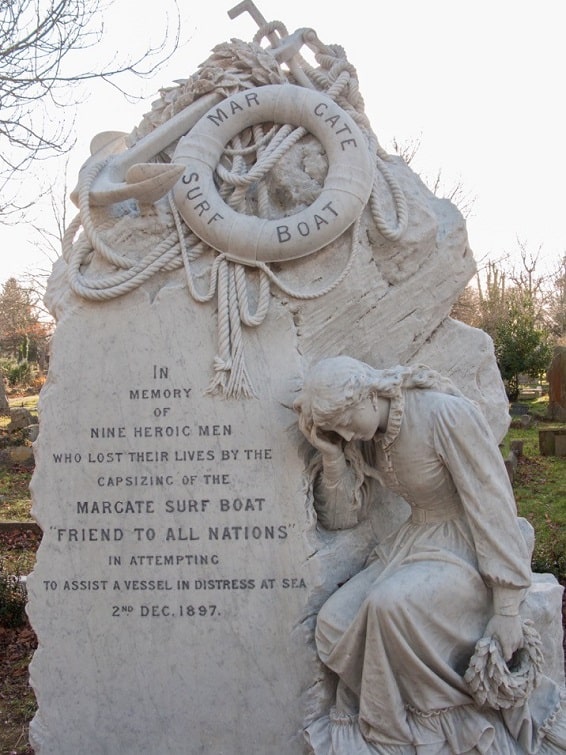 A memorial to those who sacrificed their lives was erected at the town’s cemetery and those lost were remembered recently in a service led by Margate Lifeboat Honorary Chaplain Revd Brian Sharp and attended by: Margate’s RNLI lifeboat crew, members of HM Coastguard Margate, Nicola and members of the public.

The cold, wet and windy weather on the day were just a small reminder of the conditions the Surf Boat crew faced 120 years and eight days after the tragedy. After thanking those involved in the restoration itself, Revd Sharp reflected on the efforts of the men who had died in the service of others and explained how central it is to humans across all time and all cultures to want a place to remember the departed and that as well recognising grief also act as hope for the future.

He talked about some of the symbolism on the memorial itself, for instance the laurel wreath held by the mourning woman, a wreath that would stay green and symbolise continuing life. Brian added this was a good occasion to take a few minutes to reflect in what we do in the lifeboat service and to realise that while 1897 is a long time ago in historical terms, we should realise our crews face the same elemental forces today, a fact borne out by the sad loss of the crew of the Penlee lifeboat in 1981.