A new plaque commemorating the opening of the Westcliff prom  has been officially unveiled.

The original bronze plaque, unveiled by the Prince of Wales in 1926, was stolen from its site outside the boating pool in 2015.

Since then Westcliff Conservation and Community Association Committee member George Arnheim has worked with council officer Jean Reynolds and the stonemason to get the plaque replaced.

The plaque marked the completion of the scheme to create the Royal Esplanade and leisure areas at the Westcliff in the 1920s.

It has now been replaced by the memorial made in granite.

The memorial was unveiled by the Lord Lieutenant of Kent, The Viscount De L’Isle MBE and Lady de L’Lisle on Friday (November 24). 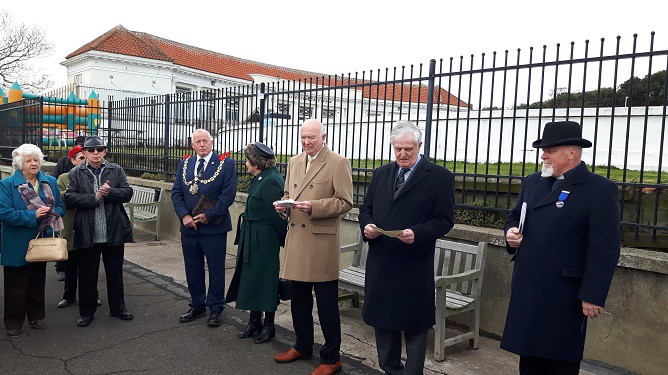 The Lord Lieutenant told the gathering on the Westcliff Promenade he was “pleased” to unveil the replacement memorial.

Rev Piper rounded the ceremony off with a prayer.

A reception for Ramsgate volunteers then took place at the Boating Pool café.

Read the history of the Westcliff and its plaque here