A Ramsgate composer and sound artist is looking for 100 people, both adults and children, for a new piece that will celebrate a century since women were granted the right to vote.

Emily Peasgood, who has recently received two nominations in one category of the British Composer Awards, will stage VOICE100 at Turner Contemporary next March.

The 36-year-old has been commissioned for several previous works at Turner, including Birds and Other Stories  for the POW Thanet festival last March. 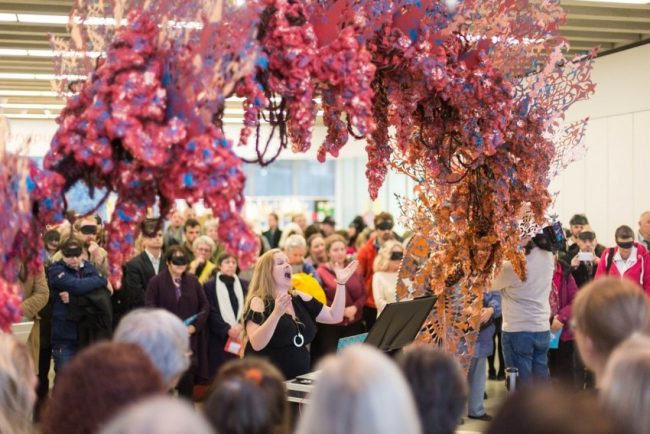 She said: “We are looking for 100 children and adults of any gender to contribute words and phrases that celebrate girls, women and equality. Words and phrases will be decided by you, and we will record you saying them at a recording studio in Ramsgate from December 2017-January 2018.

“Individuals and large groups are welcome. If people are unable to attend a recording in Ramsgate, or are a larger group, we can visit to undertake the recording.”

Emily, who has been undertaking a PhD in composing experimental music for community choirs at Canterbury Christ Church University, trained at The Guildhall School of Music and Drama and City University.

She is best known for creating public art that is performed by community choirs, musicians and sign language interpreters.

Unusual works include last year’s LIFTED, a live performance in public lifts by a choir and beat boxer.

VOICE100 will premiere at Turner Contemporary on Wednesday, March 7, 2018.

In 1872 the fight for women’s suffrage became a national movement with the formation of the National Society for Women’s Suffrage and later the more influential National Union of Women’s Suffrage Societies (NUWSS).

In 1918, Parliament passed an act granting the vote to women over the age of 30 who were householders, the wives of householders, occupiers of property with an annual rent of £5, and graduates of British universities. About 8.4 million women gained the vote.

In 1928, the Conservative government passed the Representation of the People (Equal Franchise) Act giving the vote to all women over the age of 21 on equal terms with men.