A new plaque commemorating the opening of the Westcliff prom will be unveiled this month.

The original bronze plaque, unveiled by the Prince of Waes in 1926, was stolen from its site outside the boating pool in 2015.

Since then Westcliff Conservation and Community Association Committee member George Arnheim has worked with council officer Jean Reynolds and the stonemason to get the plaque replaced.

The plaque marks the completion of the scheme to create the Royal Esplanade and leisure areas at the Westcliff.

In the 1920s the Borough of Ramsgate developed the land to the west of the Grange – Augustus Pugin’s house – creating a dual carriageway with a central tree lined walkway stretching from Grange Road to the gardens of Westcliff Terrace Mansions. This road was named Royal Esplanade with four shelters along its length.   On the cliff top a promenade was laid with a main path and a smaller path on the edge of the cliff with a grass sward in between.  Pathways were created down the cliff to the beach and a lower roadway. 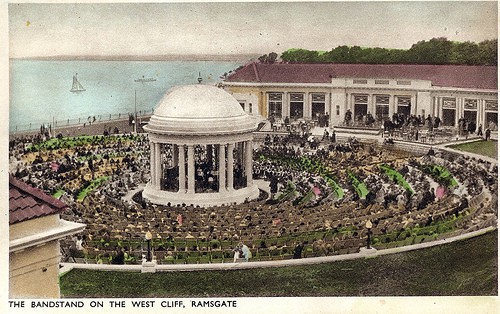 Between the Royal Esplanade and the Promenade recreational areas were developed. starting from the Grange and the field adjacent -Government Acre – which was used during the First World War to assemble troops.  The next section was tennis courts, the croquet club, the bowls club, pavilions and the Boating Pool, which was originally a bandstand.

The Rose Garden was also laid out in the 1920s and is still maintained to a high standard by volunteers, who every week, dig, weed, hoe and prune the rose beds, amounting to some 1,000 hours per year.

The next section was a pitch and putt green, although it is now a general recreation area for public use, such as dog walking, picnics and football.

At the end is Westcliff Chine – a winding path of Pulhamite [unique artificial] stone sides which leads down to the lower road.  Again, the Chine is gardened by volunteers led by Maxine Morgan of the Western Undercliff Regeneration Group.

Ramsgate was honoured when on November 24, 1926, the then Prince of Wales, opened this area with crowds of residents in attendance.

A commemorative bronze plaque fixed to the promenade side of the bandstand/boating pool was unveiled.

This plaque was stolen on Christmas Eve 2015 but will now be replaced by the memorial made in granite.

The memorial will be unveiled once more by the Lord Lieutenant of Kent Lord and Lady de L’Lisle at noon on Friday, November 24.

It will be followed by a reception celebrating volunteering in Ramsgate.

Westcliff Conservation and Community Association Committee chairman Brian Urwin said: “Our own community commit hundreds of hours each year to raise the standard of our area, plugging the gap left by our cash strapped statutory agencies.

“The benefits of volunteering are enormous to our families, and our communities and of course the volunteer.  The right match can help to reduce stress, address loneliness, find friends, reach out to the community, learn new skills, and contribute to community spirit.

“Our hope is that Celebrating Volunteering in Ramsgate will be recognised by our statutory agencies and become an annual event.