The heartbroken family of a young motorcyclist killed in a collision in Ramsgate last week have paid tribute to a ‘caring, loving and funny’ man.

Brett Appleyard, 24, died at the scene of the crash between his motorbike and a motorist in Stirling Way  at the junction with Conyngham Close on October 5.

Officers and ambulance crews attended the incident but despite the efforts of all involved they were unable to save Brett. Flowers have been laid at the site by shocked friends of the former Hereson lad. 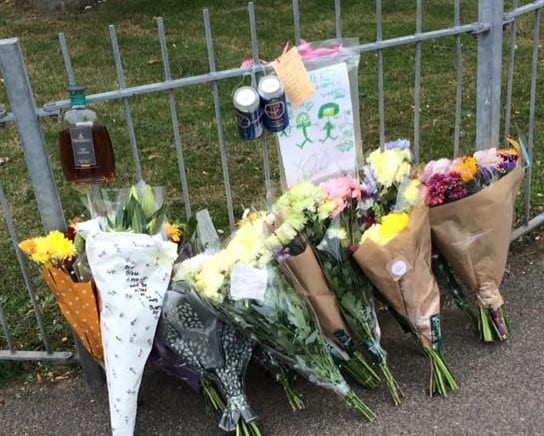 Brett’s mum Linda paid tribute to her ‘beautiful boy’ saying: “Brett will be terribly missed by everyone who knew him. He will always be my beautiful boy and the bestest big brother ever to his sister Casey. To his partner Lottie, who is mum to his unborn child, he was and still is her heart and her world.

“Brett was so very caring, loving and funny. He was pure energy. He loved to laugh and make others laugh too. He loved his family and friends very much and anything with an engine. He also loved fishing.

“He was so excited that he was becoming a dad in February and loved his baby so much that he was fit to burst. I’m so happy that he had been with Lottie for the scan that day, as he was beside himself with happiness.

“I would like to take this opportunity to thank the police and the paramedics who were there that awful night. They were all totally amazing and we are so grateful to them for trying so very hard and for being there for us.”

A fundraiser for Lottie and the baby is being held by the Hare and Hounds pub in Margate Road.

Customers are signing up for a bungee jump to raise cash. The jumps are around £50 per person. Pop into the pub for more details.

A justgiving page has also been set up by two friends who will have their hair shaved off to raise funds for Lottie and baby. The page has a £1,000 target and has so far raised £360. Find it by clicking here

An investigation into the circumstances of the collision is ongoing and officers from Kent Police’s Serious Collision Investigation Unit are appealing for witnesses, who have yet to speak to police, to contact them.

Anyone who may have also seen a black Ford Mondeo or a black and white Yamaha motorcycle in the moments leading up to the collision, is asked to contact the witness appeal line on 01622 798538 quoting reference  DK/SM/222/17or email sciu.td@kent.pnn.police.uk

A 65-year-old woman from Ramsgate was arrested in connection with the collision and later released pending further investigation.