Newly confirmed Captain Brett Scott led his team out into the warm Beckenham sunshine onto another well manicured playing surface. Wanderers kicked off down the slope and after a couple of minutes a penalty attempt by Zac Ward was just wide. The hosts’ beefed up pack caused Thanet’s eight some early problems which were soon redressed.

After ten minutes what appeared to be a clear knock on was not given and Wanderers ignored the elementary rule of playing to the whistle and three tackles were missed by defenders waiting for the ref’s signal before the try was scored. So now at 7-0 down Thanet warmed to their task and utilised their maul to good effect.

This was evident when after twenty five minutes the visitors were battering away on OD’s line before to hooker Neit Wakefield went the distinction of scoring Wanderers first league try of the season. Ward added the extras for 7-7.

A series of swapped penalties slowed the action as ODs pressed and Peter Macaulay secured a good turnover before winning the penalty for Thanet. Back came ODs and despite a fine tackle from full back Isaac Roe to slow the initial attack the ball was quickly recycled and an unconverted try gave the home side a 12-7 lead which remained the score at half time two minutes later.

Arek replaced Kieran Wright in the second row at the start of the second half and soon after kick off backs sub Reece Houghan made his first team debut coming on following a blood injury to centre Stuart Plumridge. Loose head Danny Clement ran incisively and when he was not released at the tackle Ward made good distance with the penalty.

Another penalty was then reversed and at a further penalty Thanet were deemed not to have withdrawn ten metres. A scrum penalty to Thanet was well converted by Ward and after a crunching tackle from Clement he made way for Jay Sanford in the front row.

As ODs pressed Thanet’s right wing Henry Mirams was alert to grab an interception  and from his own half outpaced all pursuers to score an excellent individual try near the posts. Ward’s conversion gave Thanet a 17-12 lead. Wanderers now had the momentum and again laid siege to the home line. As the storm clouds gathered it was scrum half Callum Doody who spotted a chink in the home defence to steal in for try number three. The difficult conversion was missed but Thanet had a ten point cushion.

As thunder and lightning gave way to torrential rain ODs narrowed the gap to three points with a converted try. Wanderers played out the remaining minutes in ODs half and took the points with a narrow 22-19 victory. 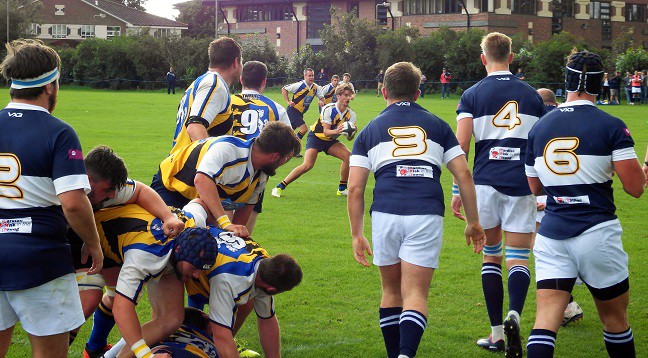 Head coach Tom Carlier was satisfied with the win but at this early stage of the season there are plenty of issues to address in training. He praised the all round play of Clement and a sterling defensive effort from the back row. Plumridge and Phil Kemp made strong contributions on their return to first team duties but it was full back Isaac Roe who was today’s man of the match. Secure under the high ball and strong in the tackle he too made a welcome return to the squad.

Next Saturday Thanet are again away at old rivals Sheppey who also won their league opener.