Candidates fighting for the South Thanet seats in June’s General Election were in the hotseat at a hustings in Broadstairs on Friday (May 26).

Dane Court Grammar  students experienced the hub-bub and tension of the general election in the school-hosted hustings. 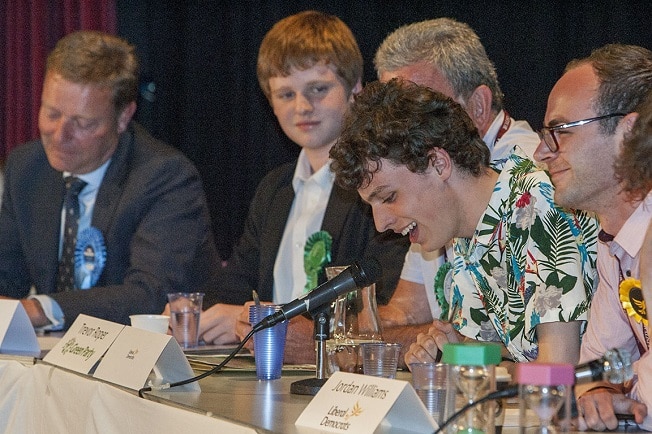 Parliamentary candidates hoping to be MP for South Thanet joined student candidates for a lively debate in front of an audience of 320 students and staff.

Chairman Tatton Spiller said: “The opportunity to work on an extended project around the election was wonderful. We had a group of 30 hardworking, intelligent and confident young people and they have all taken up the challenge of representing individual parties extremely well.

“The hustings event was a brilliant climax to the project – with candidates from all five main parties coming to the school for a partisan and noisy debate.”

Dane Court’s head teacher, Andrew Fowler, said: “It’s important for young people to get involved in local and national politics – they must let the politicians know what they think to inform decisions that affect their futures.

“Our students have strong opinions and it’s good to see them to stand up and debate their views. I hope they will now go on to change society for the better.”

The Dane Court hustings heard the candidates debate questions on national security, deprivation in Cliftonville, school funding, and why we should trust politicians at all.

A show of hands at the end gave a resounding victory to the Green Party.

Head boy Craig Wright said: “I was glad the politicians came to Dane Court, talked to us and listened to our views. I think it made students more likely to vote in the future.”

The event formed part of a programme of political education at Dane Court, facilitated by Tatton Spiller of Simple Politics.

Following three weeks of preparation, students are standing as candidates for the six houses in the school, taking part in informal hustings events every lunchtime last week at the school.