A Westbrook author has published his second book featuring the arthritic adventures of two elderly sisters on a bucket-list trip around the world.

Builder and plumber Stephen Haughan created the characters, Esther and Minnie, in the first book of the series Peshwari Nans last year.

The tale is centred on the two 80-somethings who are forced to leave the comfort of their one-bed Whitechapel flat to fulfil the dying wishes of a friend.

In Peshwari Nanas the pair undertake an epic road trip from London to Raipur, in the heart of the Indian sub-continent.

He has now published the second of the nans adventures – One Giant Leap for Nankind – with the pair travelling in their faithful Morris Traveller to the pyramids of Egypt via Dubai.

The 51-year-old, who scribbles down notes in Old Town coffee shops before locking himself away to write in the basement of his Canterbury Road home, said the books have prompted a growing fan base.

He said: “I have a growing army of fans around the world, predominantly women from countries such as Canada, Alaska, Australia and many of the US states, some of whom have taken it upon themselves to set up online Peshwari fan pages. 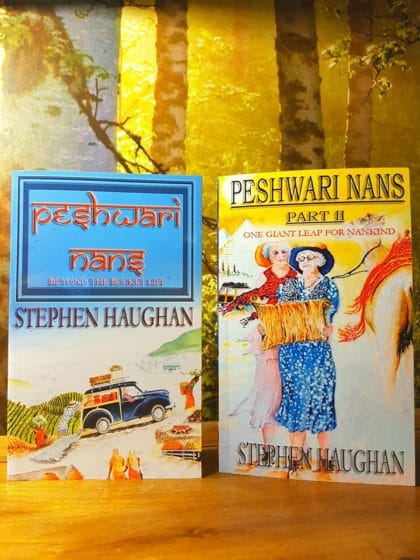 “The idea behind Peshwari Nans is to highlight the fact that life can be lived to the full well into the twilight years. Esther and Minnie are fast becoming role models for the elderly, inspiring a new breed of pensioner who are willing to embrace technology, grasp the nettle and throw caution to the wind so to speak.

Stephen had previously published three other novels, including Some Day We’ll Be Together – dealing with the subject of breast cancer – in memory of his sister Lillian who lost her battle to the disease in 2002.

He is now working on part three of the nans’ saga, finding inspiration in the coffee shops,  micro pubs, beaches and coves of Thanet.

The books are available in kindle and paperback from outlets including Amazon.

Find out more about Stephen and the adventurous nans here