The new Wetherspoon pub on Ramsgate seafront has moved back its opening date due to specialist work still taking place on the roof.

The Grade II listed Royal Victoria Pavilion had been expected to open on or close to July 18 but that has now been put back to August 29.

A spokesman or Wetherspoon said: “There is a lot of specialist work taking place on the roofs and the level of work plus recent bad weather means the pub will open later than originally stated.”

The former casino and dance hall is being refurbished. The refitting includes some of the original, historic features, a new community space, a roof terrace, ground floor sheltered terrace facing the beach and pavement cafe under the canopy area facing Harbour Parade.

Remaining spaces in the building are subdivided and could be shops or cafes.

A rooflight will be built over the central section of the pub to let daylight into the two-storey atrium space.

The pub will take two floors in total, around 600sq m. The central part of the Pavilion will be a self-contained unit on two floors, available for let.

The pavilion was designed by architect Stanley Davenport Adshead and completed in 1903.

The building has stood derelict since 2008 when Rank Leisure casino moved to Westwood.

It was in a deteriorating condition, owing to neglect and serious damage caused by a fire in 2011.

It was  listed on the Victorian Societies’ Building at Risk Register in 2013. 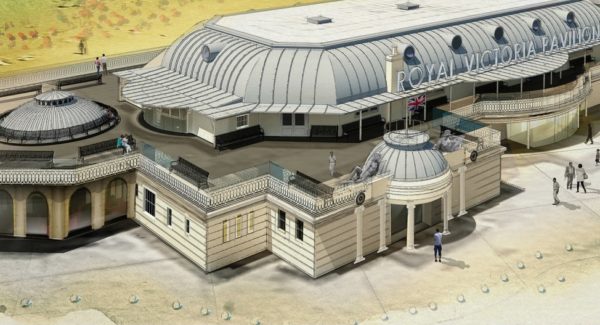 Planning permission for  the pub was granted last year and a lease deal with Thanet council came soon afterwards.

The project is costing £4million and is expected to create 100 full and part-time jobs.