Ross met pupils and staff as part of celebrations of the school’s recent award of nearly £10,000, applied for by Paul from Sport England.

‘Ping Pong Paul’ as he is now known by everyone at the school said: “It has been marvellous getting this grant. We now have amazing table tennis facilities for the children and great opportunities for them to play the sport. Ross coming in was really the icing on the cake and a real endorsement of what we are doing here at Laleham.”

Ross, who was Britain’s youngest table tennis player at the London Paralympics brought home a team Bronze from Rio. 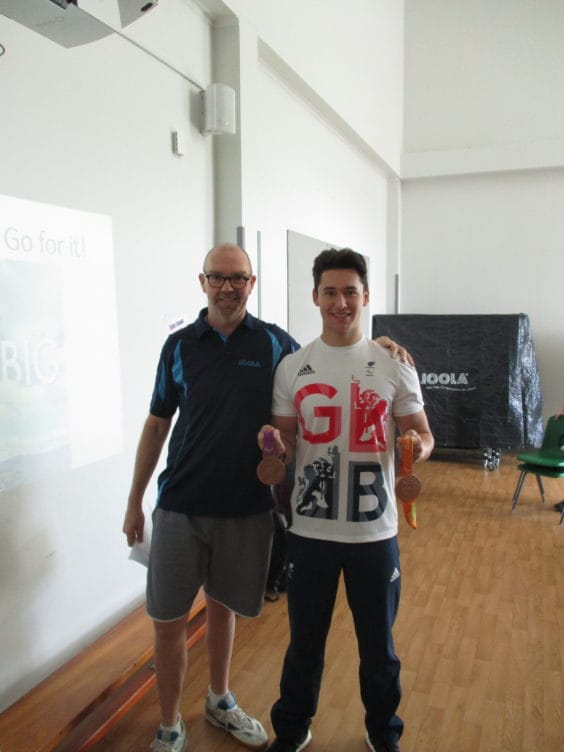 He said: “It is great seeing what Paul and the staff are doing at Laleham and the role that table tennis is playing in the school programme. I was very happy to come and support Laleham’s work and if in any way I can inspire some of the pupils to take up the sport that would be great. Table Tennis is an amazing sport and I would encourage anyone to give it a go.

“ I have been lucky enough to compete all over the world and in two Paralympic Games and I will be telling the pupils of Laleham to follow your dreams!”

Ross  and Paul spoke in three assemblies, meaning  every pupil was able to hold his Paralympic medals and ask him questions.

They were also joined by Hugo Ursell, , a Thanet-based Young Ambassador for Table Tennis England.

Paul said: “We found out what it takes to be a champion – from two hours in the gym and six hours practice on the table every day, to what you eat. We heard how he didn’t know he had a talent for the sport until a family holiday to Centre Parcs. We discovered how perseverance is the key after defeats and injury.”

The day was not just all talk. The children got to see Ross at his best, playing Paul and the brand new school robot. Some staff tried (and failed) to return his speedy serves!

Paul said: “Ross visiting has inspired so many pupils and will provide a real impetus to the sport at Laleham. We are already a school which provides excellent PE and sporting opportunities. We regard it as an incredibly important part of a great education.

“Who knows, we may unearth future Olympic or Paralympic stars of the future. Most importantly I hope his story inspires our pupils to find their talent and go for their dreams just like Ross did – be it in table tennis, sport or something completely different.”

The grant from Sport England  has enabled the school to but eight indoor tables and two outdoor tables.

Future plans  include school tournaments, staff against pupils and matches against other schools.