Paintings depicting a walk along the Kent coast from Shellness to Dungeness will help raise money for the Marie Curie Cancer Care charity.

The exhibition by artist Nick Kelly is on show at the Lombard Street Gallery in Margate from Saturday 8 April to Sunday 7 May.

On the launch day, from 1pm to 3pm, the work will be on sale.

In October Nick Kelly will be taking part in a ten day challenge trek in the Himalayan foothills. This exhibition will play a major part in raising funds for the charity event.It is an opportunity to acquire a Nick Kelly original work at a special price for a special cause.

The exhibition features 30 acrylic paintings created over a period of eight months. Each one reveals a quiet part of the wilderness along the Saxon Shore Way; shacks and breakwaters, rock pools and marshy inlets, shells and shorelines and the simple shape of nature itself.

Setting off from Shellness on the Isle of Sheppey, an off-the-beaten-track haven for birdlife and beachcombers, the route has taken Nick to Harty Ferry, which used to connect the island to the mainland just west of Faversham.  Through Oare and Faversham itself he passed Hollow Shore and Castle Coote before arriving at Whitstable. Long Rock and Hampton follow until Herne Bay. Then Reculver, Minnis Bay to Margate and The North Foreland, Botany Bay and Joss Bay. From Broadstairs and Ramsgate he passed Pegwell Bay and the estuary at Sandwich, the long stretch of beach to Deal, Walmer, Kingsdown and St. Margaret’s at Cliffe. The White Cliffs of Dover are next followed by Folkestone, Sandgate, Hythe and the simple beauty of the land of the Little Railway take us finally to Dymchurch, Romney and Dungeness. 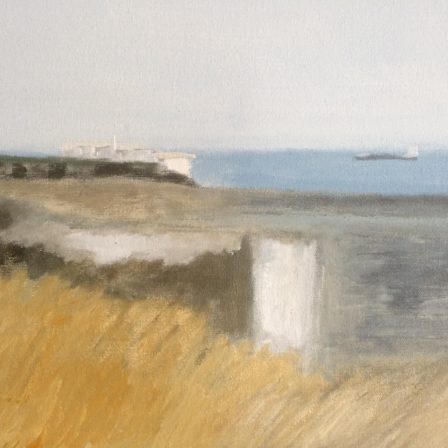 A number of the final artworks have been created in situ with the others made in his Whitstable studio from sketches en route.  The work shares Nick’s love of walking and painting with the viewer, capturing his sense of freedom and oneness with the elements within each piece.

Nick said: “Apart from exploring some of the hidden coastal places of Kent, my aim is to raise money for Marie Curie Cancer Care. In October I will be taking part in the ten day challenge trek in the Himalayan foothills. This exhibition will play a major part in raising funds for the charity event.
“I am lucky that I can combine my love of walking and painting in this way. There’s nothing better than a long brisk walk, with a sea breeze and rucksack on the back. Cheese and pickle sandwiches, Thermos of tea, sketch pad, pencils and paints. Perfect!”

The charity was chosen as Nick has a personal connection.

All work will be presented as signed original pieces.

Tuesday to Saturday 11am to 5pm,  Sunday noon to 4pm