Words and photos by John Horton

Locomotive Storage received a new delivery last night (June 20) at the Hornby site at Westwood Industrial Estate as part of the growing collection of exhibits for the forthcoming 1:1 museum. The museum is based at Hornby’s former Goods Inwards Warehouse.

Locomotive Storage, which operates a storage and maintenance business for classic railway locomotives and heritage rolling stock, is converting the buildings to create the impressive British railway heritage museum.

The company bought the former Hornby factory and warehouse site in February 2017 and already stores rolling stock at the property, which sits alongside Hornby’s offices, showrooms and visitor centre.

New arrival is Coach S4365S from The Swanage Railway, on the Isle of Purbeck. This is a semi-open brake 3rd coach, designed under the chief mechanical engineer of the Southern Region, Oliver Bulleid, to diagram design 2123 and ordered under lot 3240. 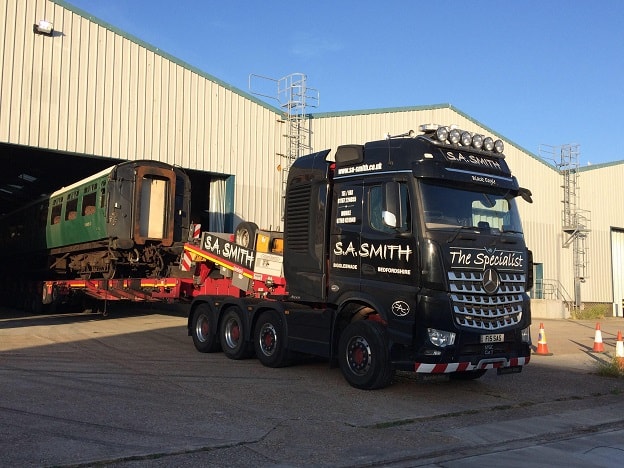 Measuring in at 64ft 6in long and 9ft wide, it was fitted with standard vacuum brakes and steam heat fitted, it seated 48 third class passengers (later designated Standard Class) split between two compartments which held eight seats each. It also incorporated an open saloon of four bays with eight seats in each bay, a single toilet was fitted between the saloon and the compartments. The guard had a small seating area, separated from the luggage area, and a “periscope” fitted in order for them to observe the position of signals ahead of the train.

Entering service in early 1948, Coach 4365 originally formed part of the Bournemouth Dining Sets, (sister coach 4366 also formed part of this and is also preserved on the Swanage Railway) of which there were 11 sets of coaches, this coach and her sister coach were incorporated into set 298.

The coach was taken out of the set in 1965 and was designated as a “loose vehicle”, being able to be marshalled into any set of coaches in a “rake” (a string of up to 12 coaches). Shortly afterwards the Southern abandoned fixed sets of vehicles, and in 1966 the coach was withdrawn from active revenue service upon completion of the Bournemouth Electrification scheme.

In November 1967 the coach was bought by the MoD along with sister coach 4366 and used at a number of military bases. In 1977 it was purchased from the MoD, which was disbanding its railway vehicles, by the Southern Steam Trust, arriving at the Swanage Railway on March 4, 1977. 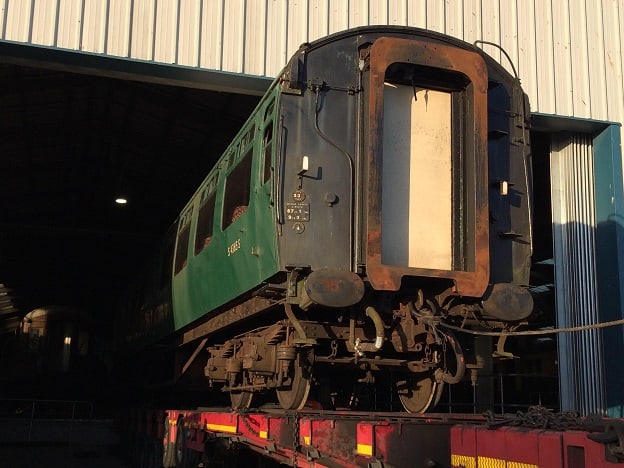 The coach became the first passenger vehicle to operate on the then “embryonic” Swanage Railway on August 4, 1977, and did so for many years up until 1980 when it was stored pending a full overhaul.

This did not come about until 24 years later in 2004. It was sent to Derby in 2005 as a “shell” for work to be undertaken by Rampart Engineering and returned in 2006. Volunteers then undertook restoration of the interior and the coach returned to service on March 24, 2012.

The coach has played an integral part of the fleet on services upon the Swanage Railway and was only recently withdrawn from service pending yet further attention.

Also within the Locomotive Storage complex for a temporary stay was a Pullman Observation Car, one of only two in existence. Formerly known as Car No 14, the Observation car was converted to its currents condition along with Car No 13. Work was undertaken at the Preston Park Works, Brighton, in 1947. They were used extensively on the Devon Belle Services from London Waterloo to Ilfracombe, via the Southern Route to the West Country.

Upon the service being disbanded, the coaches were transferred to Scotland before being sold privately. Car No 14 became famous for its overseas trip to Australia and America with Flying Scotsman, at the time owned by Alan Pegler. The American tour bankrupted him, and the loco was impounded in the USA until debts were paid. Pegler was unable to raise sufficient funding but Sir Robert McAlpine stepped in at the last minute and purchased Flying Scotsman and she was repatriated back to the UK.

Car No 14 was not so fortunate and was stuck in San Francisco. It was purchased and used as a restaurant along the waterfront and had also been used as an office building, conference room and even a store!

In 2006 its owners no longer required it and the Swanage Railway launched an appeal to raise £30,000 to bring the coach home. It was purchased and returned in 2007. After refurbishment it re-entered service in 2008 and has hosted many functions. In 2019/2020 it was repatriated with the Flying Scotsman with Alan Pegler’s’ daughter in attendance.

The Pullman car has, however, left the Locomotive Storage site today (June 21), and returned to Swanage.