Police have been called back to Margate main sands, along with ambulance crews, to what is understood to be a mass disturbance on the beach.

Police were first called this morning (June 17) and at least one beach business shut for the day following a large group of youths causing disruption on Margate main sands.

A Kent Police spokesperson said this morning: “Kent Police was contacted at 11.45am following a report of nuisance youths near Marine Drive, Margate.

“Officers attended and the group had dispersed and left the area. Local officers have been made aware.”

However, officers have since been called back to the area along with paramedics after a disturbance again broke out on the beach.

Kent Police say: “A dispersal order has been imposed on Margate Main Sands and in the surrounding area following reports of nuisance youths. Kent Police will not tolerate people coming from outside of the area and causing trouble in Thanet.” 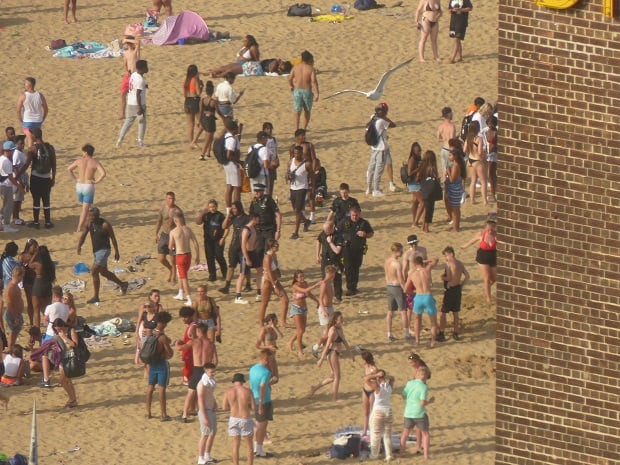 In Broadstairs a 48 hour dispersal order was put in place yesterday (June 16) afternoon to combat antisocial behaviour following  a recent incidents including a disturbance in the town this month which required the attendance of armed officers.

An investigation was undertaken and three boys, two aged 16 and one aged 15, were later arrested on suspicion of a public order offence.

The  teenagers, who are all from the Sittingbourne area, were later bailed to return to a police station on Monday 4 July.

It is reported there was also a disturbance at Viking Bay last night where two men and around 10 youths were involved in an altercation.

A Kent Police spokesperson said: “Kent Police was called to disturbance involving a group of people in Harbour Street, Broadstairs at around 7.30pm. Officers attended and spoke to the individuals, however no offences were reported and the group was dispersed.”

Further reports today indicate a number of young people were also rounded up by police in Broadstairs.