In anticipation of their visit to the Houses of Parliament in July this year, Year 6 at St Laurence-in-Thanet CE Junior Academy in Ramsgate joined live question and answer sessions with members of the House of Lords via the Learn with Lords initiative.

Pankhurst class had the chance to talk to Baroness Grey-Thompson, the former Paralympic gold medallist. Baroness Grey-Thompson explained how she became a member of the House of Lords and outlined the procedures that members have to follow – including strange details such as afternoon only begins in the House of Lords when the five-foot-long, silver mace has been brought into the chamber, which is at a different time every day.

Answering one of the children’s questions, she explained how the members of the Lords vote by walking down two different corridors to say if they agree with the proposed law or not. She then admitted that the cake in the House of Lords is lovely!

Dr Goldsmith, Year 6 teacher, said: “The opportunity to talk to a real member of Parliament was such an amazing experience for children and staff alike. Having the chance to ask questions about the workings of Parliament has created a buzz around our upcoming trip. Learning about government and democracy really helps the children to see themselves as part of a wider society outside of their local town.” 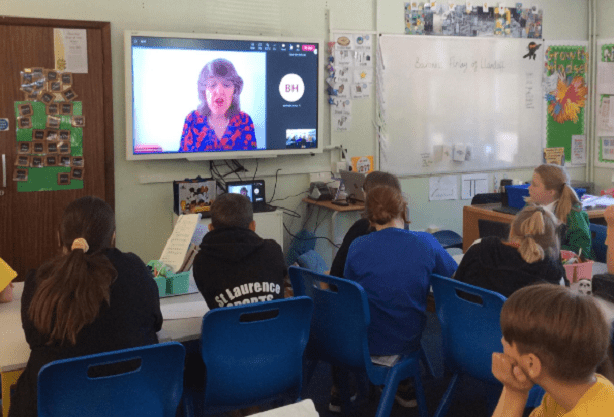 In Churchill class, Baroness Finlay of LLandaff led the discussion, telling the children how she was chosen to enter the House of Lords out of 5,500 applicants after a career in medicine. She admitted that she had not really tried hard at school until her teachers encouraged her to take her education seriously if she wanted to become a doctor.

Headteacher Sarah Graham said: “We are passionate at St Laurence about providing experiences which enhance our curriculum and give our pupils in-depth understanding beyond the classroom. Our recent work on British Values is greatly enriched by this session today and our visit later this term.”