Still riding high off the success of their premiere sellout show in Margate earlier this year, Lock Horns Wrestling (LHW) plan to hit the ground running with their follow-up event, which is scheduled for Minster Village Hall on Saturday, June 18.

LHW is the brainchild of Keith Hawkins (AKA Rocket Keith Chaos) and his partner Becky Hills, both born and raised in Margate, who decided to combine Keith’s lifelong passion for wrestling with the pair’s desire to provide an alternative space for family friendly entertainment.

As a trained wrestler, Keith, 34, has travelled extensively up and down the country to compete in events and attend training sessions. However, during lockdown the part-time seafood restaurant worker became acutely aware of the lack of dedicated facilities and local promotions in the Thanet area, despite a loyal fanbase of wrestling enthusiasts, and a growing number of those wanting to learn the art with the hope of one day stepping out under the lights and into the ring.

With fond memories of attending shows at Margate’s Winter Gardens back in the day, Keith hopes that by providing the community with a host of talented wrestlers that follow a running storyline through several matches and events, it will inspire the next generation to one day learn the craft, just like the British greats Drew Macdonald, Robbie Brookside, Steve Grey and Doug Williams had once ignited the passion in him.

Primary school teacher and mum-of-three Becky said: “Having children ourselves, we have often searched for different things to do in the local area without having to travel further away.

“As our hometown, we know the area very well, and as parents we can see what is lacking in the local area. We noticed that one of these things was wrestling, and saw an opportunity.”

The pair are excited to be bringing wrestling back to Minster and Ramsgate, the hometown of ringside hero Jackie Pallo, for their June 18 extravaganza, picking up the story where they’d left it at their last sellout event in Margate last April. 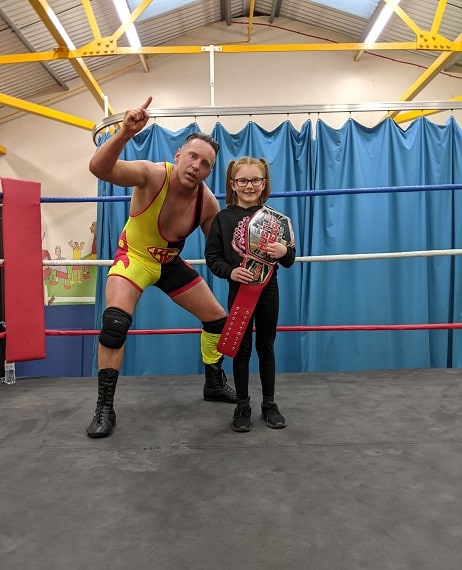 The show promises familiar faces and heels, in addition to some new wrestlers on the card. Fans can expect a ‘king of the ring’ style tournament to crown the number 1 contender to the LHW title, an LHW championship match contested under British rules and a tag team match.

Having already started off on a good foot, Lock Horns Wrestling have no plans for slowing down in the near future. The team is currently in the process of creating an LHW website and YouTube channel, where fans can see regular ringside videos and content, and keep up to date with progress.

Tickets can be purchased through Ticket Taylor at: https://buytickets.at/lockhornswrestling/676018