Hospital staff at QEQM in Margate helped organise a wedding in just four hours so the bride’s father could watch her get married.

Emma King and her partner Aaron Hams had already planned to wed in the chapel at the QEQM after her dad Peter’s condition worsened.

As a registrar was not available, the hospital’s chaplain stepped in to perform the ceremony at Peter’s bedside on Quex Ward on Friday evening.

Emma, 38, who lives in Ramsgate, said: “I just knew I wanted my dad to be there so we decided to bring the wedding forward.

“Doctors told me at noon on Friday that he didn’t have long left, and by the time I’d spoken to the chaplain it was 2pm, and after that it was just go, go, go.

“By 6pm we were getting married. It was just lovely, and my dad was so proud. He was so happy and he couldn’t take his eyes off us. It was all for him and I’m so grateful that we were able to make it happen.”

Former civil servant Peter, who was 69, had originally been admitted to the hospital in April after suffering a stroke. But doctors then discovered he had blood clots in his lungs and brain, and an active bleed on his brain. Further tests revealed he had a bowel obstruction due to colon cancer and he was too ill for surgeons to operate.

Instead, the team used medication to try and shrink the tumour. 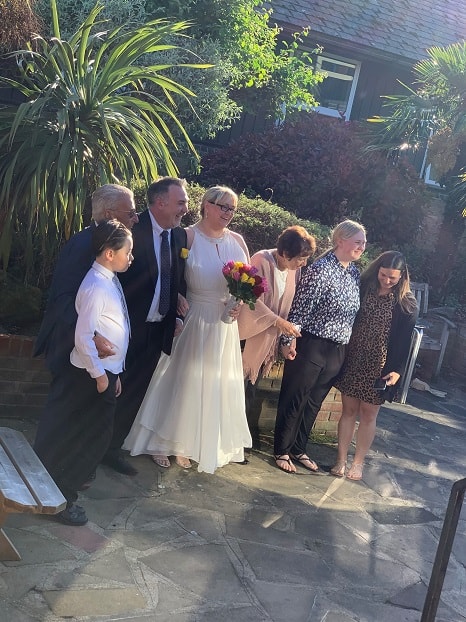 Emma, who works in catering and hospitality, said: “That gave us more time with him and we will forever be thankful. On Friday he started experiencing more pain and we just knew what we had to do.

“The ward staff were amazing and so kind. They organised flowers for me and buttonholes for Aaron, there was a table with alcohol-free prosecco and cakes, and they decorated his bed space with banners and balloons.

“It was absolutely perfect. I couldn’t believe we managed to pull it off but we did. Then we could put everything aside for an hour and just concentrate on us as a family.”

She said: “We’ve been together 20 years and had often talked about getting married before now, but life is so busy it was always put to one side, and there were always other things to spend the money on.

“But I wouldn’t have changed a thing. My dad was there and that made it perfect. He died in the early hours of Sunday and I was so pleased we had brought the wedding forward.

“We couldn’t have asked for better care from the team on Quex Ward. They were incredibly kind, understanding and empathetic. I can’t fault them at all.”

Ward manager Katie Thomas said it was an honour for the team to help organise the wedding.

She said: “It was a true team effort to help organise the wedding. We were delighted to be able to help and as word spread throughout the hospital, people from different teams gave up some of their time to get involved and make it as special as possible.

“It was a wonderful moment and I hope they will cherish their memories of it forever.”