Margate Civic Society is pleased to announce that a blue plaque dedicated to Louis Wain, the Victorian artist who became famous for his drawings of cats depicted in humanised form, is now on display at 29 Westgate Bay Avenue in Westgate, where he once resided.

The Society was approached by the house owner asking if it would be interested in a joint venture to produce and display a suitable plaque. Agreement was quickly reached and the Society commissioned its regular Town Pride plaque manufacturer to produce one suitable for the occasion.

Louis Wain was born in London in 1860 and by the time he was in his twenties he had developed into a successful commercial artist. In 1882 his mother hired Emily Richardson as governess to her youngest daughter. Although ten years Louis senior, Emily and Louis fell in love and were married in 1884. Emily had a cat, Peter, which she adored and Louis had spent many hours with Emily drawing Peter.

She suggested that he submit the drawings to the owner of the Illustrated London News, Sir William Ingram, and in 1886 Sir William suggested for the Christmas edition, a double page spread of a cats Christmas party which Louis duly produced. The artwork included 150 cats in a variety of poses and activities. As we would say today, it went viral! The Louis Wain cat had arrived.

Tragically, just three years after their marriage, Emily died of cancer and Louis became very withdrawn. Sir William took pity on Louis, his mother and five sisters and being the owner of several properties in the up and coming Westgate on Sea, offered the family one of them, in Adrian Square. He subsequently occupied 7 Collingwood Terrace, later to be renumbered as 23 Westgate Bay Avenue, and finally 10 Collingwood Terrace – now renumbered as 29 Westgate Bay Avenue – where they lived from 1906 to 1916, until their return to London

His years in Westgate became his most productive and Louis should have been wealthy but he was a poor businessman and failed to protect his work by copyright. As debts mounted and the creditors closed in, Louis and the family moved back to London.

By 1925, with deteriorating mental health, Louis was certified insane with schizophrenia and confined to an asylum in Middlesex. Upon hearing of his plight, several notable people including a certain H G Wells made an appeal to raise funds for his on-going care and he was transferred to the Bethlem Royal Hospital in Southwark where he spent the next five years in a much more caring environment.

In his happy moments he would continue to draw his beloved cats and no doubt dream about them and his happy memories of walks along the promenade at Westgate. 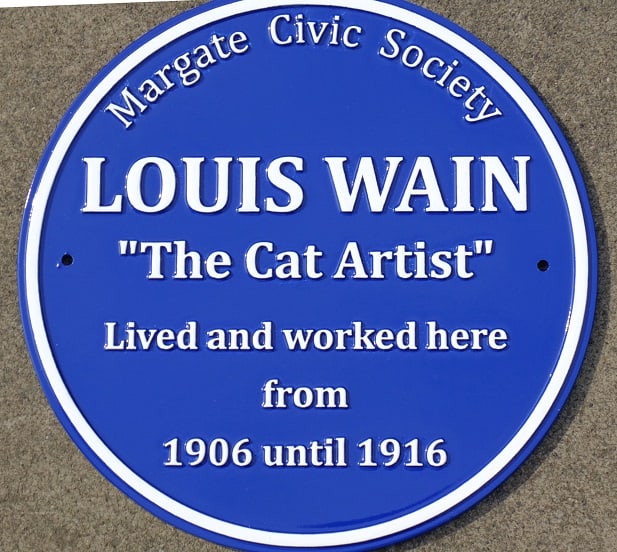 Interestingly and co-incidentally, a film entitled ‘The Electrical Life of Louis Wain’ was released earlier in the year starring Benedict Cumberbatch and Claire Foy. It is a truly delightful film with some great acting from the two leads.

I am indebted to Nick Evans, author of ‘Mayfair by the Sea’ – the story of Westgate and published by Bygone Publishing for much of the detail in this article.