Over the past couple of weeks, the ladies have had their two toughest tests yet playing Folkestone (who are in the Inner Warrior League) and Belgian touring side BrigandZe who are in League Two.

Thanet travelled to Folkestone on the back of 3 wins against development sides. The game was very fast-paced, on a smaller than normal pitch and Thanet scored some quick tries (no conversions were played) courtesy of Gee (x2), Alex and Sophia. Things levelled up in the second third with Folkestone putting on the pace. In the final third, Thanet started to carry some injuries and Folkestone made the most of their speed, leaving Thanet with a 60-20 loss. However, Wanderers could take so many positives from this match with it being only their fourth game – they showed resilience, better tackling and good handling.

Last Saturday provided a real treat for Thanet. Not only was there the excitement of playing a foreign team, but Wanderers joined forces with Gravesend Gremlins in order to make up a ‘Barbarians’ team.

The match was played on some exceptionally hard ground and there were quite a few injuries and scrapes! But Thanet didn’t let this stop them from making some incredible tackles. Notably, Léonie and Elaine showed great skill with running tackles, ensuring that the visitors didn’t have an easy time. The forwards also showed some good skills with mauling and challenging for the ball. BrigandZe were a very well organised team with plenty of subs and lots of fast players. Wanderer’s Sophia eventually scored a try to put 5 points on the board, but sadly the final score was 49-5 in favour of the Belgians. That being said, the festivities after the game showed that ladies rugby is all about respect and camaraderie and a fantastic time was had by all. 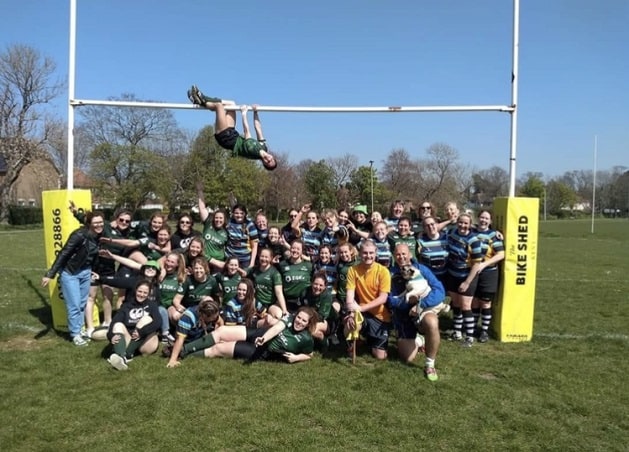 Thanet Ladies and Girls are still looking for players and as it is now the end of the season, touch rugby training starts up. This will be quite informal on Wednesday evenings from 7pm starting May 4 with all senior players – male and female – having the opportunity to train together.

There may also be younger players turning up who can play age-appropriate side games if numbers allow. There will also be some female only touch afternoons for girls and ladies during the next few months as well to encourage more females to try the sport. Please don’t hesitate to contact vicky.diamantis@thanetwanderers.co.uk if you have any queries, or look up twrufc_ladies on Instagram or @thanetwanderers on Facebook.