Raise a glass to the brewers of Ukraine at the Planet Thanet Beer and Cider Festival this Easter weekend.

Inspired by an appeal from a team of brewers in Kyiv, Thanet’s micropub and brewery Four Candles and brewer Gadds have created an Anti-Imperial Stout to raise funds for the humanitarian effort by the Red Cross.

The Resist beer was brewed to a recipe which was created in under siege Ukraine and the festival stall is being manned by Kevin Harding, boss of the Thirty-Nine Steps micropub in Broadstairs, and his Ukrainian wife Taisiya.

After Russian forces moved into Ukraine at the end of February, Kevin took on the perilous journey to the country to bring Taisiya and her five-year-old son Rinat back to Broadstairs.

The family were still in Ukraine at the start of March trying to secure visas but ended up travelling to Poland, then Berlin and then Amsterdam before eventually getting the documents needed to travel back to the UK. 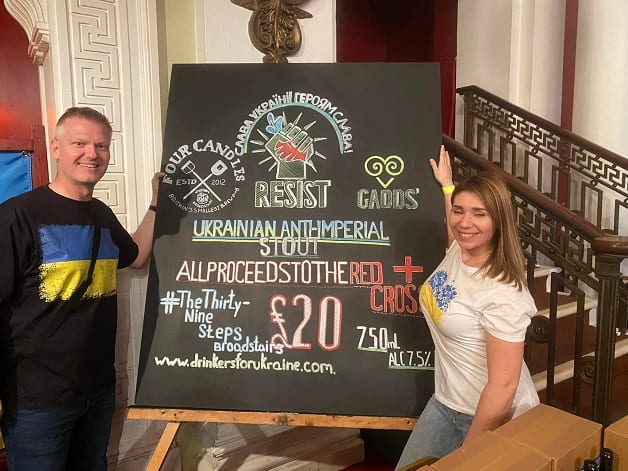 Kevin and Taisiya (pictured above) got involved with the Anti-Imperial stout creation as a way of helping the humanitarian effort for those still in war torn Ukraine.

Four Candles owner Mike Beaumont said: “This was a real team effort. The recipe called for beetroot, which is not something either Eddie Gadd or I had ever used before and we were a bit unsure how it would work out.

“But we needn’t have worried. It tastes fantastic. A very deep flavour with smoky notes. The beetroot came from a group of customers who have allotments in Broadstairs. 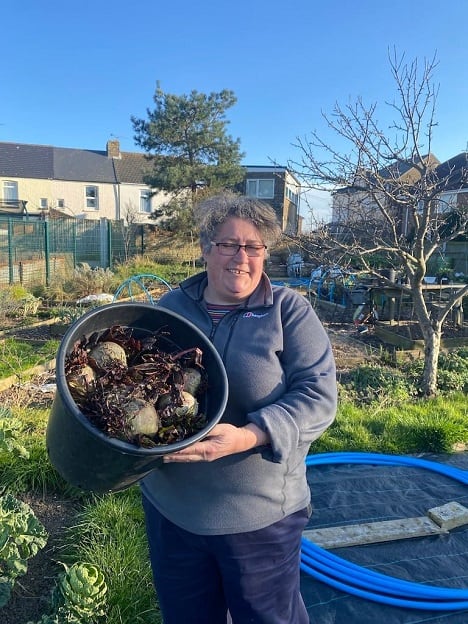 “Gadds’ provided the bottles and equipment we needed to fill them and conditioned them ready for this weekend’s launch. The labels were designed and printed for us free of charge.

“Thanet CAMRA gave us a prime spot at the Winter Gardens for our stall and Kevin and Taisiya  Harding volunteered to run it. They had a narrow escape with Taisiya’s five year old son Rinat, getting into Poland at the height of the war in the west of the country.

“Since they’ve been back they have wanted to do all they can to help the refugees still trying to make it out of there or who are waiting to find accommodation in Poland.

“Everyone has been so supportive. Now all we need to do is sell them! The weather forecast is looking great and this is the first festival since the Covid epidemic. It’s going to be busy!”

The 750ml bottles are being sold at £20 each with proceeds going to the Red Cross.

The #DrinkersForUkraine fundraising effort has been taken up by brewers around the world  who are then donating the proceeds to the Red Cross effort. Find out more at https://drinkersforukraine.com/

The Planet Thanet Beer and Cider Festival takes place at the Winter Gardens, Margate, from 12-9.30pm tomorrow (Good Friday) and from 12-7.30pm on Saturday. Entry £6 on Friday and £3 on Saturday (free for CAMRA members).