Some 120 residents turned out to attend a Minster Parish Council meeting about plans for 115 homes on farmland to the north of Foxborough Lane.

North Thanet MP Sir Roger Gale sent his apologies. He was invited but unable to attend. However, he stated that he fully supports residents and parish councillors’ objections to the application made by Gladman Developments.

The site covers an area of approximately 5 hectares and is on an arable field on the eastern edge of Minster.

When the proposals were first revealed last year Minster Action Group was set up by residents opposed to the scheme.

Gladman Developments were invited to attend the public meeting but declined. They were also invited to engage the village in a community consultation but have declined to do so, firstly blaming Covid restrictions and more recently indicating that “village hall meetings do not provide an effective forum for constructive dialogue with the community”.

They have offered to hold closed meetings with the parish council who in turn have declined because councillors want residents to be invited. 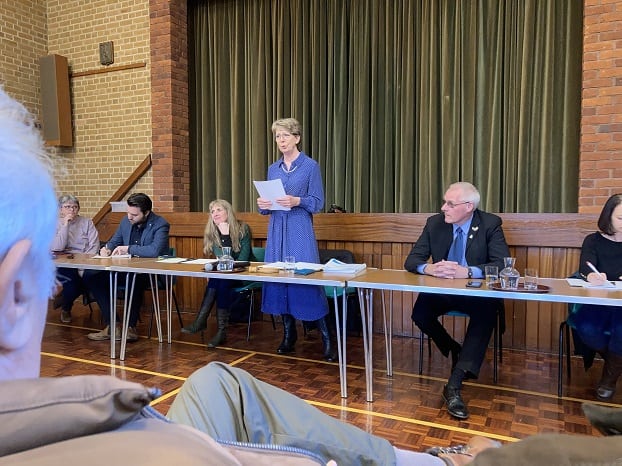 Cllr Gimes introduced an outline of the application to the meeting and said the aim was to hear villagers’ views.

A notice board displayed the plans from the application and these are available to view in Minster library.

Cllr Gimes noted that the land in question is not in the Thanet Local Plan to 2031 – a blueprint for development – and applications have been rejected twice previously due to its open countryside location and major highways access issues.

She acknowledged a need for houses in Minster so villagers’ children would be able to buy houses but said they must be the right houses in the right place. With a development of 214 houses already approved west of Tothill Street, 36 being built on Monkton Road and a further site allocated for 36 houses south of Foxborough Lane, she said quite a large number of houses are already coming to the village.

Cllrs Smith and Pugh addressed the audience and both emphasised that grade 1 farmland should not be built on saying it was needed to grow food. Cllr Pugh also highlighted the school place issue because Minster primary is full and unable to expand. Children on the development west of Tothill Street are expected to attend a school at Manston Green but that is yet to be built. There are no school places in Minster for more children.

Lack of GPs, sewage and highways issues were also raised. Residents -coordinated by Minster Action Group- plan to carry out a traffic survey later this month to lend weight to their concerns.

All councillors encouraged residents to express their views on the application via the Thanet council’s planning portal or by post.

Caroline Fleming, of Minster Action Group, provided guidance about how to make those comments. She also invited residents to join a protest rally through the village on May 1, meeting at 10am by the children’s playground in the recreation area.