Residents are being invited to play the 2p machines at Tivoli Amusements in Margate as part of a ‘live artwork’ project taking place on April 14-15.

Cornwall based artist Stuart Robinson, has created limited edition artworks in the form of casino style ‘chips’ that will be placed in 2p coin pusher machines at seaside amusements in towns including Margate. The public are invited to head down to the arcade, with a pocketful of 2p coins to play the machines and try to win one of the artworks.

Stuart said: “For me the artwork is really about getting people to play and enjoy the 2p machines, to revisit that joy and excitement that I remember from playing these on my annual seaside holidays as a child. The physical artworks act more as a memento of that experience.” 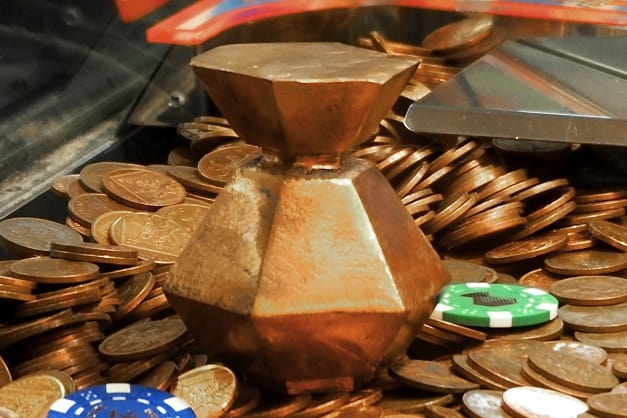 The artist also wants the player to think about their own experiences in the arcades, perhaps as a child on holiday, or perhaps with their own children and how: “in a society increasingly dependent on technology, expensive gadgets and foreign holidays for entertainment, a simple 2p played in an arcade can bring such joy.”

The title of the work ‘Deus Ex 2p Machina’ is created from a  Greek phrase and translates as ‘God from the 2p Machine’ a tongue-in-cheek reference to the power a simple arcade game can have.

The live artwork also runs alongside an exhibition of related work at ‘The Auction House’ in Redruth.

Robinson’s work has often featured the great British Seaside holiday as the subject matter, including his work ‘I’m Westward Ho!’ in which he drove a 1985 Volvo with a large Neon arrow on the roof across the country, retracing the route his family would take to go on Holiday from the Midlands, to Westward Ho!. His work has also recently been shown on ITV as part of their ‘ITV Creates’ ident series.