Holidays are lovely because we get to change our routines for a little while and that’s a genuine pleasure.

Bryan has activities he particularly likes to do in the Easter holidays – holiday camp at St Lawrence, where he gets to see friends, spending a couple of days with his nan and granddad … oh, and spending time with me, of course. I like to do simple things with him – this weekend, we’ve been to the park to play tennis together, but then he had an invite to have a sleepover with his grandparents, and he wasn’t going to turn down such an exciting opportunity!

I like to make sure he has a lot of different opportunities, both with me and with other people he cares about (and I trust, of course). As a single parent family, he and I have a very close, intense relationship, so it’s important he develops relationships with other people as well – as much as I’d love to spend every moment with him, I can’t honestly say he’d agree with me!

But this Sunday, I’m treating him to a special father / son day. It was his birthday back in March, and he wanted an experience – a memory – so I bought him tickets to “The Magic Show that goes wrong” at the Marlowe for Sunday (maybe today when you’re reading this, or yesterday if you’re catching up).

Today has become his honorary birthday, and he gets to choose where we go to eat in Canterbury – he’s already requested Kaspa’s for dessert, so I’ve set some general guidelines for the main course; there’s a financial limit, for one. But I’m going to make sure we get into Canterbury early so we can go and play in the park for an hour or so first and make him feel like a king for a day – it’s his “second birthday”, after all. 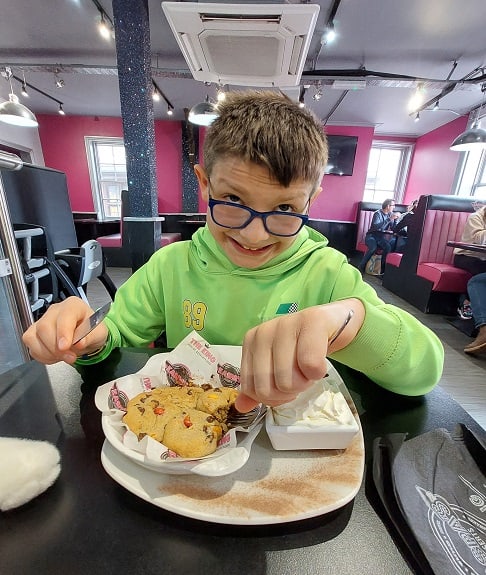 By the time you read this week’s column, I will inevitably be exhausted and desperate for an early night – but I have a vague memory of agreeing to a slightly later bedtime as well for his second birthday and, of course, he will remember that promise.

We’ve also got a games console recently (actually, through a comedy of errors, we got two games consoles, but I’m keeping the one our lovely neighbour has passed onto us); it’s a Nintendo Wii, and I can remember vaguely playing on one when they first came out. Neither Bryan nor I are particular gamers, but we were delighted to have the opportunity to try one out. One of the games that came with the console was Mario Brothers- I can remember similar games when I was a child, and I was surprisingly happy; this was something from my own childhood that I could connect with Bryan over and teach him! We spent a lovely hour the other evening playing this Mario game and we genuinely enjoyed ourselves – I think it caught both of us by surprise, as neither of us knew what to expect. If we can find a couple of games that we can do together, I think that will be a good use of the console by itself.

It also gives me the chance to show Bryan how to be safe online and in gaming; talking about it is one thing, but actually practising the skills needed to be sensible with technology is so important. I don’t want to hold Bryan back from the ever-changing world of phones, tablets, computers, games consoles … the list goes on … but I have always been determined to show him that there is a world outside technology as well.

During lockdown, we went out every single day – to the park, for a walk round the park, or even a socially-distanced chat with our neighbours – and I’m so glad we did; it kept us connected with the world and other people, and was so good for our mental health. Now that we have a console, we can have it as part of our life, but only a part of it … there’s so much more to savour and enjoy, and whether that’s with me or his friends and wider family, I want Bryan to enjoy it all.