Catering trailers, an ice cream van, fryers, microwaves, lawnmowers and a chainsaw are among the 171 lots being sold by Dreamland through NCM auctions.

The lots are listed as for sale due to Dreamland’s “consolidation of assets.”

Other items available for online bidding include a Mary Rose Play Boat Climbing Frame – buyer to dismantle – and children’s soft play equipment. There are also chairs, freezers, a mini stage, lighting cases and equipment such as popcorn makers.

The bidding for items is open until 1pm on March 31. 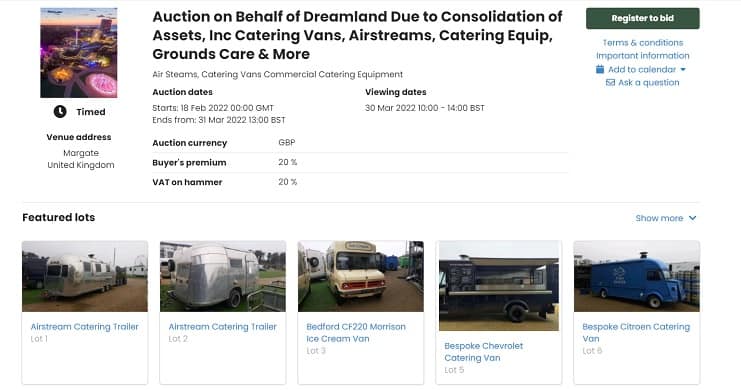 The latest auction of goods follows the sale of several of the park’s rides. In January Dreamland’s Pendulum thrillseeker ride was transported to its new home in Great Yarmouth’s Pleasure Beach site. According to Pleasure Beach bosses the Pendulum was one of six rides that were up for sale.

Rides made by Zamperla and installed at the Margate amusement park in 2018 were also advertised on specialist website Interlink.

Among the rides was the Endeavour – named Dreamcatcher following a public competition in 2018- which had more than 2,900 entries.  Also listed as available was the Zamperla Jumping Star.

Other rides sold are understood to be the Air Race, Up Up and Away and Soaring Seagulls, Previously confirmed as sold last year was the Zamperla Twister Coaster (Pinball X)  which was relocated to Flamingo Park in Hastings.

Park bosses have previously said that rides including the Scenic Railway will return to operation as usual this year.

In December a Dreamland spokesperson said: “Through the winter months we are carrying out essential maintenance works across the park and reviewing our ride line up for our reopening in 2022.

The Scenic Railway, Hurricane Jets, Cyclone Twist and Betty’s Beehive Coaster are among rides shown below the statement. (UPDATE) An opening date of Sunday 29th May has just been announced.

A packed programme of music events is booked for the season and includes gigs with Paul Weller, Simply Red,  All Saints, Craig Davis and The Beach Boys.

Recruitment fairs – usually held in February and March prior to covid – have not as yet been held this year.

Part of the Dreamland site is currently being used by production crews for Sam Mendes film Empire of Light. This includes Dreamland Cinema and the area known as Godden’s Gap which will be the site of a 124 bed hotel.

A £4million allocation from the £22.2 million Margate Town Deal fund for Dreamland will be used towards the renovation and reopening of the cinema building which has been empty for more than a decade.

The site will be turned into an entertainment and conference centre with space allocated to community use and charities.

The allocation has caused controversy with some questioning why the privately owned business is receiving public funds. The Dreamland estate was sold by Thanet council to park operator Sands Heritage Ltd in 2020 for £7million – £2.3 million for the Dreamland estate and £4.7million to buy the car park area.

Significant funding then came from offshore Arrowgrass Capital Partners but in 2019 it was announced  the hedge fund would be shutting down with arrangements made for the sell-off of Arrowgrass investments and outstanding loans.

Arrowgrass bought out Dreamland shares to bring the park out of administration in 2017.

Documents submitted to Companies House by Sands Heritage for accounts up to December 2020 say: ““Following the announcement by Arrowgrass Master Fund Limited (the ultimate controlling party) of its intention to instigate an orderly close of its fund operations, the board of Margate Estates Limited (the immediate parent company of Sands Heritage Limited) appointed an agent in March 2021 to manage the sale process for Margate Estates Limited and its subsidiary companies.” 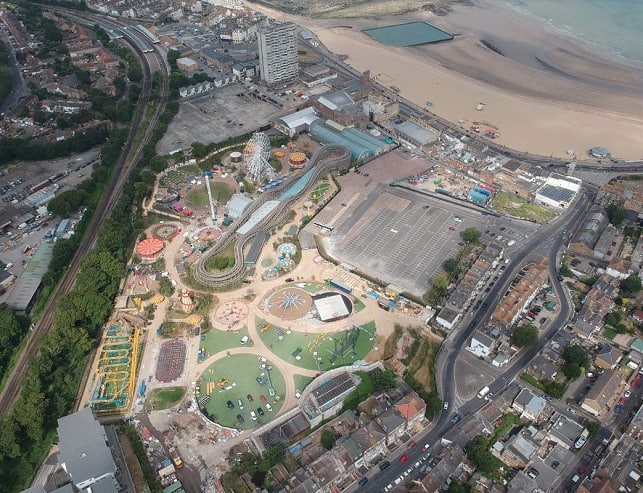 The real estate and leisure company which owns Dreamland was put on the market, being offered for ‘acquisition’ through property specialists Jones Lang Lasalle (JLL).

It means the entire Dreamland estate, including the Dreamland car park purchased from TDC, parcels of land surrounding the site inclusive of the plot secured for a new 124-bed hotel, and the option to purchase Arlington House, multi-storey and land, was being offered as assets of the company.

The brochure issued by JLL last year said: ““The subject sites provide a once in a lifetime opportunity to be involved with a catalytic resort regeneration scheme in one of Kent’s most treasured locations and to develop and grow the creative movement that currently thrives in Margate.”

Dreamland has been asked for a statement regarding the auction, which rides will be open this year and whether there will be staff recruitment.

Head of Operations, Shane Guy said: “We are investing in our facilities in preparation for opening this Spring, including the provision of food and drink. We’re looking forward to welcoming everyone back to Dreamland.”

The park reopens on May 29.