West-end and TV actor Connor Curren this week took time out from his busy touring schedule to take part in an hour-long Question and Answer session with Post-16 students at Ramsgate’s Laleham Gap School.

Laleham Gap is a special Communication and Interaction school for children with autism and speech and language issues.

Connor, who is autistic, is currently playing the lead role of an autistic boy, Christopher, in The Curious Incident of the Dog in the Night-time. He also plays character as Tom in the TV show ‘Dodger.’

Teacher Paul Ursell, who organised the session, said: “One really important part of education is teaching students the things they need to know. Another is inspiring them and showing them how they can make a success of their lives. And the Q&A session with Connor did just that.”

Because students were able to quiz Connor for a full hour they were able to ask over 50 questions and make  contributions to the discussion. They found out that when he was a teenager, Connor had found coping with some aspects of his autism hard but he was now able to see what an ‘asset’ it was. He explained it made him more determined and focused and he probably saw things differently to neuro-typical actors. This, he felt, made him quite unique and gave him an edge. 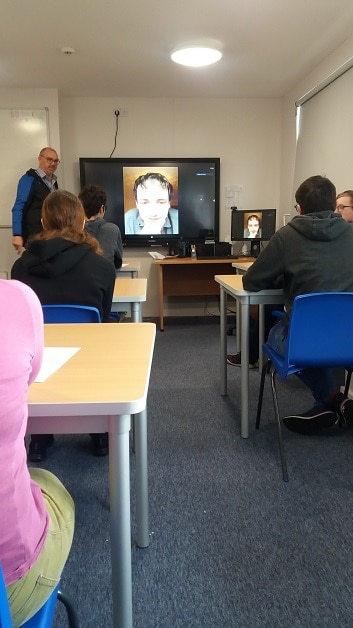 Doing the video call from his grandparents’ house, students found out where he grew up on the outskirts of Glasgow was a ‘nice wee place’ and he enjoyed a normal working-class upbringing. He did admit to having nerves before going on stage but said they were “good nerves.” His first ever part in a school play was in Joseph which resonated with the students as this was a play many of them had performed themselves just a few years ago. From the age of 8 Connor set his heart on acting.

Connor also discussed how acting can be hard work. He explained he loved acting because it was like ‘playing’ but that as Christopher being on stage for two and a half hours and all the lifting, stunts and crazy stuff meant he finished work ‘drenched in sweat!’

He told the students two of his big passions were films and guitars and some of his heroes included Gary Oldman, Robert De Niro and Daniel Day-Lewis. He had met another actor he really admired, Christopher Ecclestone, on the set of Dodger. To one student who wanted to become a writer he gave tips suggesting she immerse herself in reading and writing like he immersed himself in films and acting. Most of all he urged them to do the thing that makes you happy.

Connor said afterwards: “It was lovely chatting to Mr Ursell’s Post 16 students. They had such great questions and it was interesting hearing their perspective. I just really want them to find the thing they love and go for it. For me it was acting. For them it can be whatever they love.”

Mr Ursell explained: “Last year we questioned Anne Hegarty and this time Connor. It is so important for my students to see that people with Asperger’s, autism or other communication issues can be successful and live fulfilling lives. Nothing explains this better than hearing it from them directly.”