Carpentry students from Broadstairs College have undertaken a project at the Newgate Gap ‘art box’ shelter.

The students visited on Friday (February 12) to install planters and trellis work at the site. 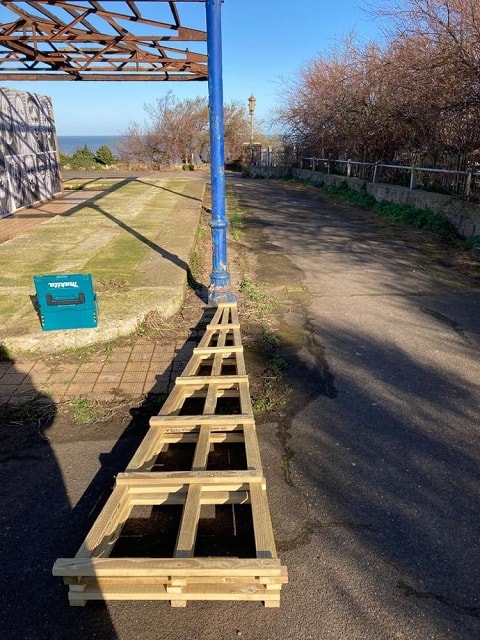 The ‘art box’ is due to be in place for up to two years as a base to display art. A six month programme of exhibitions is currently confirmed with each lasting for a month.

The first, month-long ‘art box’ exhibition went on display this month but was targeted by vandals. CCTV is now being installed.

The Carpentry Level 1 students and tutor Joshua Sweeney take part in community projects as part of the course. They are also working on a pathway for SureStart.

Joshua said: “Dean effectively gave us full autonomy on the design so I commissioned the students to find a design we could all agree on. Last week we spent the lesson making the planters and trellises in a popup workshop.”

Carlotta Alum, from Stretch, said: “It is an exciting development and shows a commitment from a local community.”

The box is being painted on Tuesday (February 15) by street artist Cat Neil. There is also a Stretched Lips 9 evening at The Albion Rooms on February 27 with the theme “vandals can not win.” Entry is free, poets, open mic and music runs from 7pm-10pm.

In 2018 the shelter had been earmarked for demolition but Thanet council reversed that decision following a Save the Newgate Gap Shelter campaign.

Long-term plans for the shelter include the first national museum for Outsider Art and a rebuild “that will be sensitive to the original features and incorporate as much of the roof and iron work as is safe and possible,”