A Cliftonville community group created last year to campaign against the demolition of the roof at the Newgate Gap shelter has slammed Thanet council after the roof was removed  and a second shelter was covered with hoardings in the run up to the Turner Prize opening at Turner Contemporary this weekend.

Friends Of Cliftonville Coastline say they are “dismayed” at the ‘last minute clean up’ at the Newgate Gap and Fort Hill shelters.

A spokesperson said: “Our beautiful and iconic international moderne sea shelter on Fort Crescent has been boarded over in its entirety, blocking the view of our famous sunsets over the Turner Contemporary. There is no plan for renovation.

“The Edwardian Newgate Gap sea shelter has been partially demolished without planning permission, in a Conservation Area. Planning permission was withdrawn after countless objections last year. We were given no warning.

“We are dismayed and upset by Thanet District Council’s panicked last minute *clean up* of our beautiful but neglected shelters. Our council is whitewashing the issues that continue to beleaguer our district, prioritising short term national glory instead of tackling the systemic problems that blight our beautiful home.”

But Thanet council says that section 78 building control notices have been issued for both shelters because the structures were in a dangerous condition.

A council spokesman said: “Recent repair work at the Newgate Gap Shelter in Margate has been carried out in the interests of public safety. On June 13, our Building Control team deemed it a dangerous structure and served a Section 78 Building Act notice to remove the danger immediately.

“The site was originally fenced off but the repeated trespass placed an unacceptable risk to the public which we had a duty to mitigate against. This is compounded by its close proximity to the Viking Adventure Playground.

“Contractors were therefore appointed to remove the timber roof covering to make the site area safe. This work does not require planning consent and was an emergency measure to remove any danger to the public.

“All the timber has been taken away and stored safely. It will not be disposed of until it has been tested for contamination. Important aspects of the shelter such as the pillars and floor tiles will not be removed.

“Following the removal of the timber roof covering, the contractors have raised concerns over the steel roof structure stability. Our technical services team are therefore assessing the site and ensuring that additional emergency repair work is undertaken to make the structure safe in line with the Section 78 notice.

“This will include getting the contractors to support the steels, testing to check for further loose materials and adding netting to the underside to stop any materials falling and to deter people from climbing on the structure. Once this is done and the structure is deemed safe, Heras fencing will be removed. 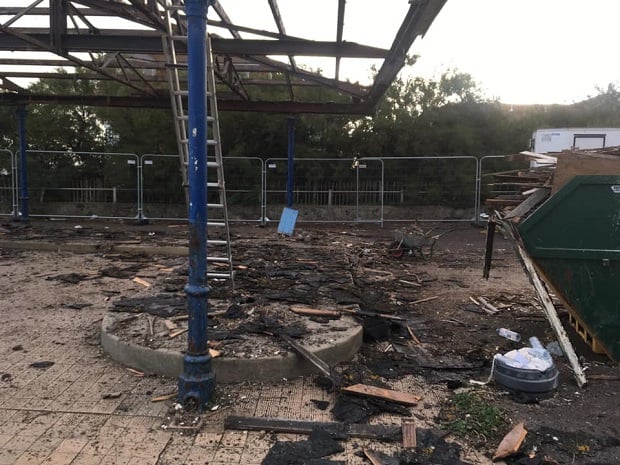 “The shelter has already been approved by Cabinet for Community Asset Transfer and the closing date for expressions of interest is October 9. Please email estates@thanet.gov.uk with your submissions. The structure will also be subject to an independent evaluation commissioned by Thanet District Council to assess any further steps required ahead of an asset transfer process.”

Organisers at the Margate Now festival, running alongside the Turner Prize, are due to create artwork for the hoardings at the Fort Hill shelter.

The council spokesperson said: “Fort Hill Shelter has been temporarily boarded up in the interests of public safety. On August 22, the council’s Building Control team deemed it a dangerous structure and served a Section 78 Building Act notice to immediately make it safe. The danger has now been removed in accordance with these requirements and the Shelter is now deemed safe.

“The organisers of Margate Now are due to display artwork on the hoardings in celebration of the Turner Prize coming to Margate. One of the festival’s key aims is to use disused and empty spaces with the hope of bringing new attention and life to these areas.

“Following the Turner Prize exhibition, an independent assessment will take place to inform future options and ensure due process is followed.”

Friends of Cliftonville Coastline say money should be dedicated for the shelters to be repaired.

The spokesperson said: “Young people have no dedicated spaces to hang out, and there is nowhere for our large elderly population to rest and sit along the coastline between the two shelters.

*Rather than fix endemic and deep rooted problems TDC are spending our money on barges costing £1.5million for the commercial port at Ramsgate.

“Friends of Cliftonville Coastline have been in talks with TDC for an asset transfer of the Newgate Gap shelter. Health and safety grounds have been cited but we have seen no formal assessment, nor are we certain that the pigeons roosting in the roof were adequately and humanely removed.

“Despite assurances by contractors the original wooden seating has been removed. Demolition of the structural steels was only halted by the actions of a concerned resident. TDC are still tendering for asset transfer by early October, but do not appear to be actively engaging with the community.

“We believe this is part of a systemic problem within TDC – a lack of vision or strategy for our built and natural environment that includes the disregard and neglect of our coastline and utter disinterest in preserving our unique heritage for locals and visitors alike.

“Despite much of Cliftonville being within designated Conservation Areas concerned community activists struggle to access funding or the necessary help to make any headway. Cliftonville is one of the most deprived areas in the country and there are huge problems stemming from such poverty. We believe that taking care of our unique buildings and environment should be at the heart of any efforts to improve the area, due to the huge benefits they bring to a sense of well being.

“Instead TDC have gone into chaotic last minute overdrive to gloss over the huge issues in Cliftonville: crashing around with thoughtless and no doubt expensive short term solutions that do nothing to improve the area or address the root issues. All because the Turner Prize is in town in a matter of days.”