Kent Police pantomime marks its 23rd anniversary this year with its production of Jack and the Beanstalk.

It will be staged at the Theatre Royal Margate from February 17-19.

Shows are at 2pm and 7pm and are raising money this year for Pilgrims Hospices and the Garden Gate Project.

It will be the last panto at the Theatre Royal before the venue closes on April 28 for refurbishment.

He quickly finished a script, asked colleague PC Al Davison to direct the production and a “one off show” The Wizard of Auss was put on at the Theatre Royal in Margate in January 1999.

It was performed by serving police officers from Thanet, (The thin blue chorus line) who, all in all their own time, worked tirelessly to produce a fantastic show.

Both Ken and Al are retired now. Due to the success of the first show, and the large amount of charity money raised, it was decided to put on a charity pantomime for the community each year.

Annually serving police officers, retired, civilian staff, and family members come together and put on the panto to raise money for different charities. 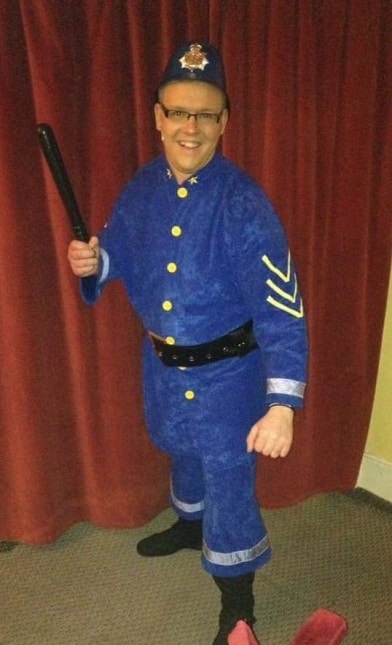 This year’s writer, producer and director Martin Douglas (above) said: “Over the years we have raised in excess of £100,000. Our heroes have vanquished many a foe and rescued dozens of damsels.

“Our pantomime dames have performed many dodgy ditties and dances and we have probably produced more custard pies than Mr Kipling.

“Our Pantomime this year marks our 23rd anniversary. and is…

About a boy who had to climb

Up to the sky to rescue his one true love,

Trapped in a castle high in the clouds above.

Along the way we meet Simon and Billy

And three plods who are all rather silly

Snitch and Snatch will cause confusion

Horrid Fleshcreep will plan to spoil

This panto tale back at the Theatre Royal

Gold to beans, Rags to riches

Our performance will have you all in stitches

With plenty of gags, (Some pretty cheesy)

Back on the stage to entertain you

So book today and avoid arrest

We’re doing Jack and the Beanstalk

And it’s simply the best

Jack and the Beanstalk tickets: