Boxing legend Frank Bruno is among the VIP guests at Frames snooker and pool club in Cliftonville on February 26.

Frank Bruno MBE is currently promoting his new book Frank Bruno: 60 Years A Fighter The sporting memoir sees Frank opens up on his journey to becoming a World Champion and the fight which has come after retirement with mental ill health.

Frank, now 60, was a professional boxer from 1982 to 1996. He had a highly publicised and eventful career, both in and out of the ring. The pinnacle of his boxing career was winning the WBC heavyweight title from Oliver McCall at a packed Wembley Stadium in 1995, in what was his fourth world championship challenge. Bruno faced multiple top-rated heavyweights throughout his career, including two defeats against Mike Tyson in 1989 and 1996, and a defeat against fellow Briton Lennox Lewis in 1993.

He was also known for his exceptional punching power, scoring 38 knockouts in 40 wins and giving him a 95% knockout-to-win ratio; He has remained a popular celebrity with the British public following retirement. 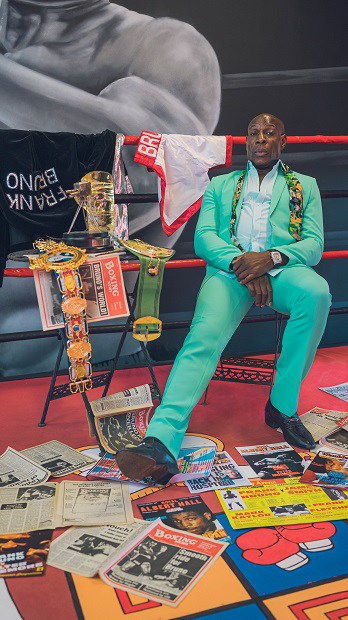 In 2003, frank was taken from his home by medical staff assisted by police officers, under the provisions of the Mental Health Act 1983. He was taken to Goodmayes Hospital in Ilford, where he underwent psychological and psychiatric tests. He had been suffering from depression for several months beforehand. He was later diagnosed as having bipolar disorder.

The father-of-four later set up The Frank Bruno foundation to help others struggling with mental health.

The night at Frames, in Northdown Road, runs from 6pm until late. It also features stories and cabaret from John Stracey, auction and a raffle.