This week North Thanet MP Sir Roger Gale underwent an hour of in-depth questioning from Laleham Gap’s Post 16 pupils. Fresh from national media interviews about why Sir Roger wants Prime Minister Boris Johnson to go, the probing he got from the students was no less intense!

Paul Ursell, the Post 16 teacher, had organised the question and answer session specifically to encourage his pupils not only to know their democratic rights but also to begin to become more confident in using them.

Mr Ursell  had organised a ‘Democracy Day’ back in October for his pupils where the Education Officer from Parliament had explained much of the mechanics of Parliament. 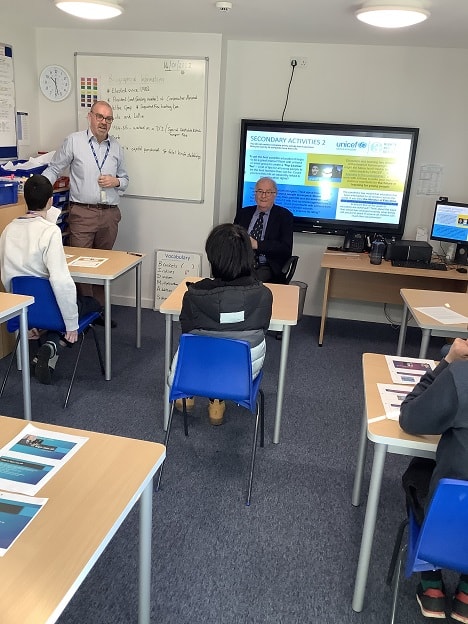 Mr Ursell said: “I organised this follow up so my students would get a chance to exercise some of their rights and to build their confidence to question those in authority about the issues that matter to them.”

Prior to Mr Gale’s arrival Mr Ursell’s students carried out some detailed research about the MP. They found out about his career, both as an MP and prior to that. They found out how he had voted on key issues and about some of his beliefs, so they were able to question these. Their thoughtful questions ranged from the personal (why had he become an MP, what was he like at school and asking about his dogs) to the political. Students quizzed him about what his government was doing for the homeless, why he held the views he did on same sex marriage, whether Brexit was good and was it fair that people aged 16 in Scotland and now Wales could vote in elections but not in England.

Sir Roger praised the students for their questioning and thanked Mr Ursell for organising the event, promising to return another time. Sir Roger said: “One of the things I like most about my job is events like these. It is great to be questioned by bright young people. I like it because these sessions are always challenging, they always make you think. The students today asked very searching questions, as they should and it is very healthy for politicians to answer their questions.”

Mr Ursell was equally proud of his students, saying they showing a greater confidence in exercising their rights and that it boded well for them as future citizens who would stand up and participate in the debates that will shape their futures.