A memorial football match will be held in Ramsgate on Monday (January 3) in memory of a popular footballer and youth coach who sadly died this month.

The avid Chelsea FC fan was a popular member of the footballing community from Sunday League to his work coaching youth teams. He helped youngsters in teams including Ramsgate FC’s U15s to improve their skills and was a regular player in the club’s Vets team.

In a touching statement Matt’s family said: “Our dad Matthew Jackson was a real family man who always made sure his mother, wife, six children and three grandchildren felt his unconditional love and passion for them to achieve and follow their dreams.

“He had his own passion, which had a big place in his heart, and that was his love for football, particularly the Sunday League in which he played for as long as we all can remember. 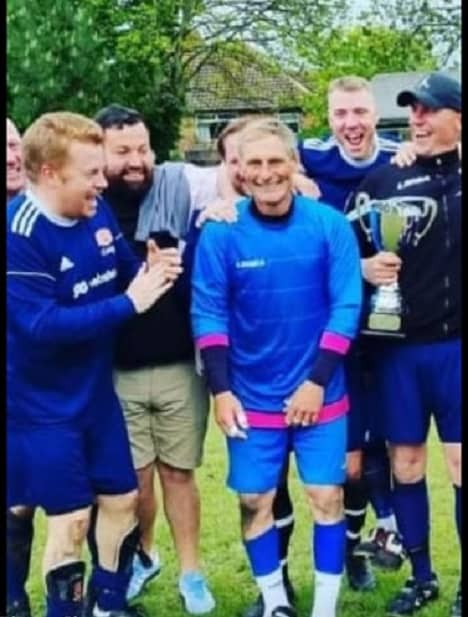 “All of us have football memories of our dad and how he would love our support on the sideline of his weekly matches no matter the weather, he would take us up to Jackey Bakers (playing field) and chuck a ball for us to sit on, telling us if we got cold to have a kickabout.

“These are memories we will cherish forever alongside the grandchildren who were proud of their ‘grandad in da van’ in his goalie position in the recent years.

“He had big hands, our dad, great for goal keeping but even better for hugs. Dad was known by so many through Sunday football and recently through coaching the youth teams and leaving behind all his football knowledge and expertise.

“We are completely overwhelmed with the support received from all that knew and respected Dad through his love for football and the events that have been arranged in his memory to keep his legacy going. We would like to thank everyone involved for bringing us some happiness and warmth that he meant to others what he meant to us. Jacko to you, Dad to us, but overall a true legend.”

The charity match in Matt’s memory will be played between Ramsgate Veterans FC and Ramsgate FC Managers/Coaches XI on the 3G pitch at The WW Martin Community Stadium.

The match will take place after the Ramsgate first team game against Ashford United which is a 3pm kick off. The memorial game is to kick off at 6.15pm and is free entry with people asked to donate into the buckets that will be at the ground.

The game is between Matt’s former team Ramsgate Veterans FC vs Ramsgate Managers/Coaches XI because Matt coached the Under 15s Ramsgate team.

Joint managers of the Vets team are Richard Todd, Graham Birkett and club secretary Aaron Hamms. The captain for the Ramsgate Vets team will be one of Matt’s sons, Connor Sinclair, and the teams will be lead out by Connor, Elijah, Ellis and Jaye. The manager of the Ramsgate Coaches team will be Elliot Austin.

A spokesperson for Ramsgate Vets FC said: “We at Ramsgate Vets FC would like to pass on our condolences to the family for their loss and will keep Matt’s legacy alive through the team he loved playing in goal for. A big thank you to Ramsgate FC and Chairman James Lawson for providing the excellent facilities and pitch for the game.”

There is also a crowdfunding page raising funds to help support Matt’s family.