Residents and councillors have expressed their disgust after a massive pile of waste items was dumped at the St Peter’s Park Road side of Broadstairs railway station.

The huge load was photographed and captured on video today (December 28) by shocked resident Heidi Rogers who says it “stopped me in my tracks.” Her picture and film shows the heap of boxes, papers and bagged rubbish dwarfing the recycling containers at the site, which had been emptied just before Christmas meaning the waste had been dumped in the days since.

Heidi reported the eyesore to local councillors. St Peter’s ward Green councillor Mike Garner contacted Thanet council’s street cleansing team who were due to tackle the mound today  (December 28) but the pile remains, with the wind spreading it even further afield.

Cllr Garner said: “It’s very disappointing to see so much rubbish dumped by the bins in the station car park after Christmas.

“There’s so much there that the bins can no longer be seen! Unlike some parts of Thanet, most people in this area have recycling facilities so there is little excuse for most of it. “Saying that, the council could have anticipated that there would be a build up of rubbish at sites like this and been better prepared to collect it across the district.

“I know the Street Cleaning team work hard all year to keep these areas cleared but if there aren’t enough operatives working they’ll be fighting a losing battle all week.”

Fellow Broadstairs Independent councillor Ruth Bailey says although the rubbish heap is not in her ward, she has also reported it and says she has requested CCTV at the site.

She said: “I just cannot comprehend how people can keep adding to an ever increasing pile of rubbish when it’s clear there is no further capacity. This isn’t recycling, it’s fly-tipping and people can be fined if their details are found among the detritus.

“Much of the rubbish I have seen in this spot in the past has been trade waste which should be disposed of commercially. I was informed that these bins were emptied just before Christmas, so this atrocious mess has built up since then.

“The loose rubbish is blown all around the surrounding area making it difficult and time consuming to clear and causing environmental damage. Thanet District Council has said on social media that they will collect additional residential recycling during the Christmas period if it is stacked appropriately next to bins so there is no excuse.

“The main household recycling centre at Margate is also open and it takes little more effort to take it to the tip. It just needs a little common sense to be applied.

“If the public recycling bins are full, either hold on to the rubbish for a while or use alternative arrangements. I have reported this to TDC for clearance as I know other councillors have.

“The use of CCTV would be useful at this site to monitor the situation and I continue to c all on TDC to install cameras here.” 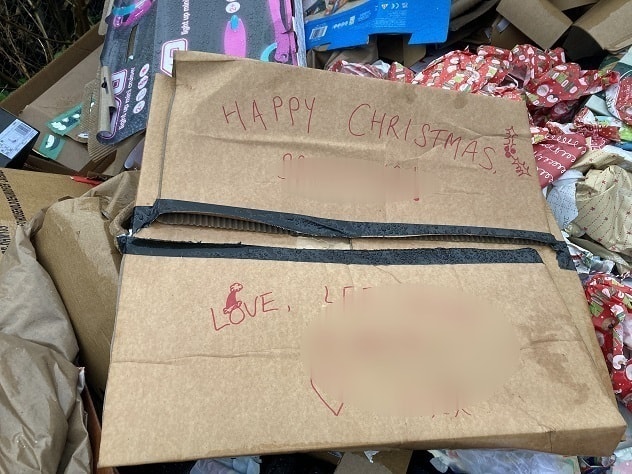 Cllr Garner says he has also requested CCTV, even if only on a temporary basis.

He added: “A few of the other traders in the town who dispose of their rubbish responsibly are getting fed up with it. We need more enforcement.”

There are no changes to household waste and recycling collections over the holiday period this year. Bins can be put out by 6am on the usual day of collection.