The Royal Shakespeare Company Club at The Royal Harbour Academy have had a special visitor.

Richard Navarro, a talented musician, songwriter and performer, came into school last Friday (December 10) to work with the students on music. This music will be used in their performance on the Marlowe Theatre stage in Canterbury at the Marlowe Playmaker Festival in March 2022. 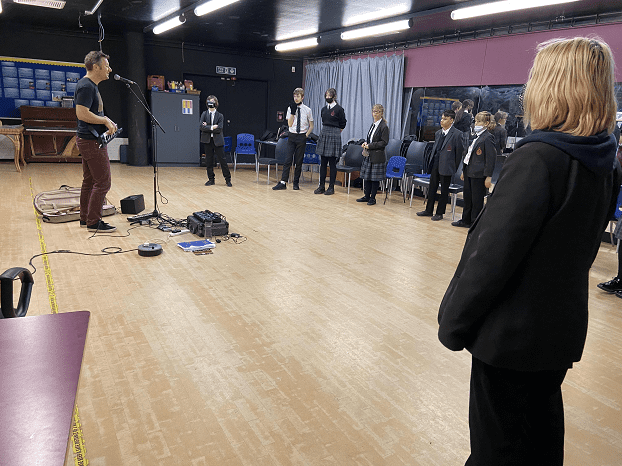 Richard brought many fascinating instruments with him. Although Richard brought a violin, a keytar (keyboard/guitar) and a harmonica, the students were entranced by his use of the loop pedal. Everyone got involved with singing and tapping being put on loops with other sounds layered over the top to create dynamic and interesting pieces that would be possibilities for the show.

The students, with Richard’s help, were able to accomplish a lot in the two hour slot. Every student had interesting ideas about how the music would affect their performance and what effect it may have on their prospective audience.

Staff at The Royal Harbour Academy thanked the organisations that made it possible and Richard for his infinite musical wisdom.