A ‘memorial garden’ was created and a vigil held on Ramsgate Main Sands this afternoon (November 27) to mark the deaths of 27 people who died crossing the Channel this week.

The event was in solidarity with the Care4-Calais vigil held at Downing Street at 2pm today.

Organised by resident and artist Teresa Askew, people were asked to wear black and bring a flower to build the memorial.

Teresa called for change saying the deaths were preventable. She added: “No should have to die trying to find a safe place to live. The Government can change the process so that people can apply for refuge from abroad so they don’t have to risk their lives to get here.” 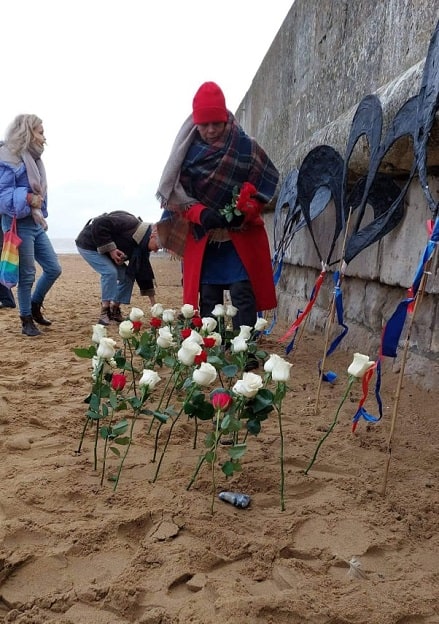 Ramsgate mayor Raushan Ara was among those who attended. She said: “I was extremely pleased to see so many friends attending the vigil of Remembrance for the people who died in the sea, a few days ago. This situation has been going on for far too long. It is time that we called upon our government, to bring an end to this needless suffering and death.”

Those who drowned on Wednesday after their flimsy vessel sunk during the crossing were 17 men, seven women – one of whom was pregnant – and three children.

Five people have been arrested in France in connection with the crossing.