People on the Community Payback scheme in Broadstairs have transformed benches, shelters, walls and fencing in and around the bandstand and Victoria Gardens.

The works, using materials paid for by the town council and Broadstairs Tourism & Leisure Association, have taken place over the year but now drawn to a close and the weather gets colder.

Locals and visitors have often stopped to thank the team for their efforts, showing how the work has been valued in the town.

The Community Payback scheme involves completing unpaid work as a requirement of a court order. Individuals take part in projects in their community, such as picking litter, planting trees, decorating a community centre and other tasks.

Unpaid work as a sentence of the courts started in 1973 as ‘Community Service’. The work must benefit the local community/charities and not take paid work away from others.

Sentences of between 40-300 hours can be imposed and people on probation are likely to have other requirements alongside their unpaid work. Projects and placements aim to make a positive contribution to the community and allow those sentenced to make reparation. Local communities can nominate work projects. 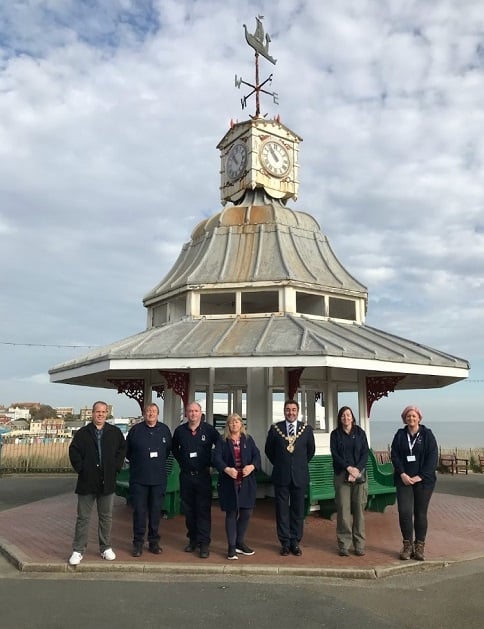 A Town Council spokesperson said: “The community response has been amazing and it’s great for persons on probation to receive the positive feedback from residents.

“The team has recently refurbished some memorial benches and we have had some special and emotional responses from the families saying thank you. The seafront area does get weathered so the project will provide us with plenty of work to come.”

Payback team leader Danny Ward said: “I have been doing this job for 22 and a half years and this is the best project for feedback and comments from the public on the job we have done.

“It is good to see we are making a difference and it gives the boys and girls a sense of worth. One young lady  said that when she comes down with her kids for the fireworks she can now show them something where she had made a difference in a good way.”