The game was only a minute old when Wanderers offended in front of the posts and went 3 points down. The unfamiliar mix of players took a while to settle but the familiar figures of Peter Macaulay and the three experienced back-rowers helped bring some shape to the side.

Callum Doody began the game at scrum half and also took over kicking duties. Charlie Knight, was again at full-back and made two try-saving tackles in quick succession.

On ten minutes he made a nicely judged interception and outpaced the opposition as he ran in from distance for Callum Doody to convert and give Thanet a 7-3 lead. A penalty was conceded from the kick-off which led to seven points for the hosts. The resultant line-out to the corner and a subsequent forwards drive, followed by an excellent conversion, restored the home advantage at 10-7.

Thanet were competing well and a Doody free kick kept them in Dart’s half who then had to retreat another ten metres for dissent at a penalty decision. Thanet were clearly conceding weight in the scrum but, around the 30 minutes mark, powered their opponents backwards for a good try for hooker Jay Sanford. No conversion but Wanderers edged ahead 12-10. 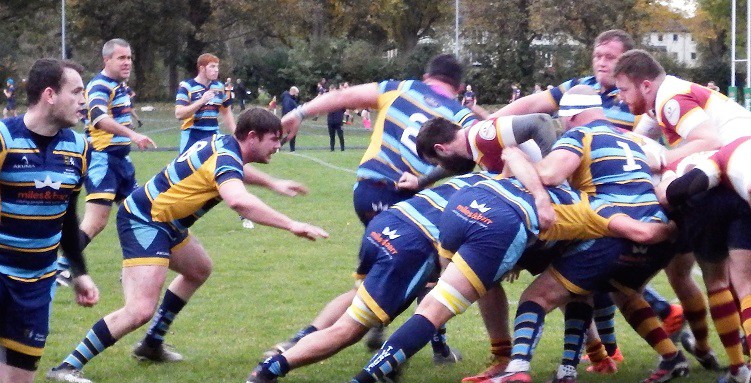 Knight’s long clearance from a dangerous restart established Thanet in the home half and a penalty gave Doody the opportunity to extend the lead to 15-10. The final twelve minutes of the half saw the hosts raise their game and good handling brought an unconverted try before gaps in Wanderers defensive line were then well exploited by Dartfordians for another try that was converted for a 22-15 lead at half-time.
The important first score of the second half went to Darts who created a three man overlap for a touch down wide on their left to record their bonus point try. Replacement hooker Reagan Doody came on and became the 36th player to represent Wanderers first XV this season.

Shortly afterwards Jack Startin returned to the fray after he took a knock earlier on and replaced Lennie Brown who had made his first start of the season. The hosts well contained three attacking mauls from Thanet before another try saving tackle from Knight preserved Wanderers line. Macaulay was  off after another great shift for Wanderers; Callum Doody went to ten with Harrison Leach off the bench at scrum-half. Darts turned the screw in the final ten minutes scoring a penalty and two tries with one converted to record a convincing 42-15 victory after a good all-round performance.

Thanet’s patchwork side  put in a real shift that pleased the small band of travelling supporters and their coaches. James Green became the only ever-present this season for Wanderers bringing all his experience to the cause again.

Those players who stepped up from the two’s will have benefited from the experience  against tough opposition. In their absence the previously unbeaten 2s lost 48-0. The value of experience was made clear, not only by Peter Macaulay but also by fellow veteran, David Lemon who also spent much time on the pitch.

Callum Doody was outstanding at both scrum-half and outside half but Wanderers man of the match had to be Charlie Knight who scored a try, saving tackles and kicked well throughout the game.
Wanderers selectors will be glad there is no fixture this week and will hope to have a wider selection of players to choose from for the fixture at home against Beccehamian on 27th November (Kick off 2.30pm)