A Thanet teacher who underwent a total hysterectomy and  surgery to remove both of her fallopian tubes and ovaries in 2019 has started face-to-face menopause fitness and support classes in a bid to help other women.

Charlene Barber, 47, says she wants to break the ‘taboo’ surrounding menopause and use her MenoClass to bring normality back into women’s lives.

The classes take place online and face to face every Wednesday at 6.15pm at The Studio in Cliftonville.

Charlene, from Margate, said: “I know only too well the trials and tribulations of being thrown headfirst into ‘surgical menopause’. I had the physical symptoms of achy joints, severe fatigue, hot flushes and brain fog and my mental wellbeing was seriously affected. This had a big impact on both my home and working life.

“I had a total hysterectomy and I was still very young to have to have that.

“What really did come to light was the lack of support that was given in how to deal and treat some of these symptoms which was having such a negative effect on my life.

“Menopause is such a taboo subject and I am very much speaking out  for women, it is not ok how this is overlooked.

“Women up and down the country and not getting the support they need, and in some cases not getting the  the medication such as HRT.  I have now been waiting over 6 months to see a Menopause Specialist to be given a prescription of testosterone as they
are the only ones who can prescribe this type of medication. The waiting lists are too long,” 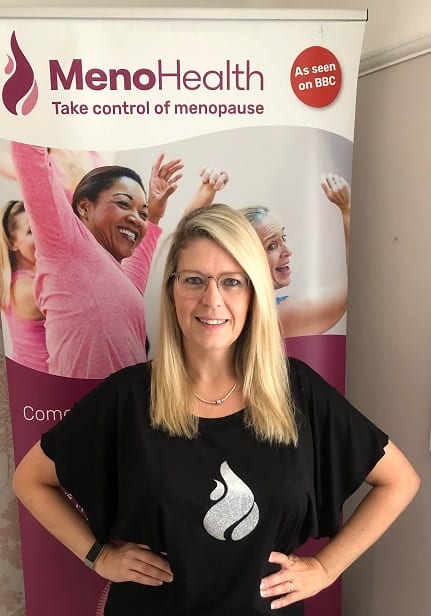 Charlene, mum to two grown-up daughters and three now adult step-sons, knew that to get back to some normality in her life  she needed to make drastic changes, but also she wanted to support other women who were suffering like herself, so she undertook additional training to become a MenoLeader for MenoHealth UK.

She said: “The school has been really supportive.”

MenoClass is the first of its kind in the UK to offer support, education and exercise to help women to take control of their menopause.

Charlene said: “The Menoclasses are absolutely amazing, women are supporting each
other, sharing top tips and knowing that they are not in this alone. This can be so reassuring at a time when they sometimes feel that they are on their own.

“For many women they are nervous when they first come to a class but just being there means they have taken that first step.”

Government agreed that the cost of repeatable HRT prescriptions will be cut, which will save women who rely on HRT hundreds of pounds per year, and that a new government Menopause Taskforce would be created and co-chaired by Minister for Women’s Health, Maria Caulfield and Carolyn Harris MP.

The taskforce will consider the role of education and training, workplace policies and peer groups for menopausal women To further improve access to HRT prescriptions, the government has also committed to look into combining two hormone treatments into one prescription, which affects approximately 10% of women accessing HRT.

Charlene said it was good news that the task force was being formed and added: “Even though HRT is free of charge in the rest of the United Kingdom, and for some women can be on 2-3 different types, which means separate prescription charges for each, this is certainly a step in the right direction, and will now be able to give women more choice.

For more information about Charlene’s Menoclasses including her ‘Face to Face’ class at The Studio in Cliftonville, email her at charlie.barber@menohealth.co.uk or visit her facebook pages at @CVBBalancedHealth and website www.cvbbalancedhealth.co.uk
and @MenoClasswithCharlie